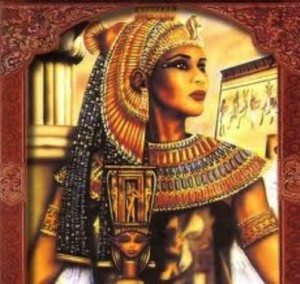 Staatliche Kunstsammlungen Kassel, Germany/Superstock Dying, the patriarch Jacob feebly lays his hands on his grandsons Ephraim and Manasseh, whose parents Joseph and Asenath emerge from the shadows of Rembrandt van Rijn’s painting.

The wife of Joseph, Asenath (Hebrew Asnat) is mentioned only in passing in Genesis. Her names means “she belongs to Nut [also known as Neith],” an Egyptian god of death and rebirth.

“In bearing a theophoric name relating her to the ancient Egyptian goddess Neith, Asenath brings to her marriage with Joseph strong overtones of royalty and world creation, for the goddess appears both as mother of the king and as primordial creator. Thus the marriage represents a full joining, both literally and figuratively, of Egypt and Israel on multiple levels” (Hollis, p.54).

That Pharaoh himself performed the marriage highlights the political and social importance of a daughter of a priest of On, the Hebrew name for Heliopolis, one of the chief cities of Egypt. In light of biblical prohibitions against exogamous marriages, how did Joseph marry an Egyptian, particularly the daughter of a heathen priest and remain a pious hero? It seems biblical authors found this intermarriage unremarkable, perhaps even laudable since Asenath became the mother of two tribes in Israel, Ephraim and Manasseh who founded the royal dynasties of Jeroboam, Ahab and Jehu. Scholars suggest that in the older biblical traditions exogamy was not prohibited as demonstrated by Moses marrying a Cushite woman.

Asenath was not Jacob’s only foreign daughter-in-law. We need to keep in mind that most of the patriarchs had no difficulty marrying Canaanite or Egyptian women. “How many of Josephs brothers also married Egyptian women we have no way of knowing. It is likely that many of them did. When the Hebrew people left Egypt, ‘a mixed crowd also went up with them’ (Ex. 12:38” (Bellis, p.93). Certainly the stories show a great deal of ambiguity over the issue. Not all foreign women were considered evil. However, there is an indication that the ancient writer was uncomfortable with Asenath’s ethnicity. Jacob eventually adopted Ephraim and Manasseh (Genesis 48:5). Exum suggests that Jacob’s adoption “corrected” the irregularity of Israelites descending from an Egyptian mother (p.109, n. 19). However, if Asenath’s foreignness was an in issue, then Abraham taking Hagar should have elicited scorn, not praise.

Rabbinical sources solved the riddle of Asenath’s ethnicity by claiming she was actually the product of sexual union between Dinah and Shechem (Targum Jonathan; Sofrim, chap. 21). This would make Asenath Joseph’s niece, an acceptable marriage partner and a fellow Israelite. The extra-biblical sources explain that as the product of rape, Dinah’s brothers wished to kill the child so Jacob sent her away. However, prior to leaving, he tied a disk around her neck to identify her as a member of his family. Eventually she was adopted by Potifera and therefore was unknowingly raised as an Egyptian. When Joseph met her later, he recognized her “ID tag” and knew her for who she really was. Though she is barely mentioned in the Bible, in the apocryphal novel Joseph and Aseneth, she plays a staring role. The issue of marrying an outsider is resolved by transforming Aseneth into an Israelite through “conversion.” It’s a lively read, if you are interested in an early Jewish novel.

In the early traditions about Aseneth in the Book of Jubilees, the Testament of Joseph, the Aramaic targumim of Onqelos and Neofiti 1, and many Jewish legends, Joseph’s owner Potiphar is identified with his father-in-law, Potiphera. In Greek, the names are identical. According to Genesis 37:36 the Midianites sold Joseph to Potiphar, a seris of Pharaoh and his chief steward. In older translations seris was translated as eunuch. As a result Potiphar’s characterization as a eunuch brought up the question of how he could have fathered a daughter. Rabbinic traditions not subscribing to the suggestion that Asenath was Dinah’s daughter, proposed that Potiphar conceived Aseneth prior to being made a eunuch or she was the daughter of his wife through other means. Based on modern scholarship, seris more appropriate means “officer” therefore we need not trouble ourselves with how a eunuch could be Aseneth’s father, even if Potiphar is to be equated with Potiphera.

Genesis Rabbah suggests that due to the proximity of the story of Tamar and Potiphar’s wife, we are to understand that both women had pure motives for their apparent inappropriate sexual behavior. Potiphar’s wife “saw by her astrological arts that she was to produce a child by [Joseph], but she did not know whether it was to be from her or from her daughter.” Based on her misunderstanding of the source of this child, she attempted to seduce Joseph with the purpose of fulfilling the predetermined outcome. Ooops, the child was to be from her loins, not Joseph’s!

The tradition recounted by Origen from the Prayer of Joseph informs us that Aseneth was the daughter of Potiphar and his wife. According to the tale, she eventually told her father of her mother’s attempt to bed Joseph. To rectify his wife’s misbehavior he gave Aseneth to Joseph as a wife. This exegesis resolves the worry about how Joseph could have married the daughter of the man who had him thrown in prison. However, there is nothing in the Hebrew which suggests that Potiphar was the same person as Potiphera. “It seems possible that the process of translation triggers speculation about Aseneth that the original Hebrew did not” (Kraemer, When, p.314). Josephus, Philo and many rabbinical passages concur that the two men were distinct.

Blessing of Ephraim and Manasseh

Some commentators suggest that Jacob actually adopted Joseph’s two sons with the words “Now, your two sons, who were born to you in the land of Egypt before I came to you in Egypt, shall be mine” (Genesis 48:5). For this reason Ephraim and Manasseh each received an important inheritance in the land of Israel.

In a haggadic tradition describing Jacob blessing his grandchildren, Joseph beseeched his father to bless Ephraim and Manasseh for the sake of the righteousness of his wife (Aptowitzer, p.258). Given the manner in which Jacob crossed his hands thereby putting his right hand on the youngest, not the firstborn, it is hard to not recall the switching of blessings of Jacob and Esau initiated by Rebecca. Did Asenath stand silently by as the text suggests, or did she learn the lesson of a matriarch of her adopted family and perhaps pull some strings behind the scene? In another midrash, Asenath urged Joseph to take the boys to their grandfather because “I have heard that if one receives a blessing from a righteous person, it is like receiving it from the Shekhina,” (Midrash Ha-Gadol 48:1).

Regardless of the adoption, Asenath remained the mother of two tribes and she was given credit for them in Genesis 46:20, just as Jacob’s other sons were accorded each to their mothers. In fact, the adoption made Asenath the seventh matriarch, certainly a mother of great distinction in Israel (Eskenazi, p.269). Her presence in the Bible has fascinated readers for millennia. If an ancient tradition regarding Asenath has been lost, it seems that through imagination she has gained great honor.

Bohak, Gideon – Joseph and Aseneth and the Jewish Temple in Heliopolis (Society of Biblical Literature, 1996)

Hubbard, Moyer – “Honey for Aseneth: Interpreting a Religious Symbol” Journal for the Study of the Pseudepigrapha 16 (1997) 97-110

Pervo, Richard I. – “Aseneth and Her Sisters: Women in Jewish Narrative and in the Greek Novels” in Women Like This: New Perspectives on Jewish Women in the Greco-Roman World. Levine, Amy-Jill, ed. Vetus Testamentum. (Society of Biblical Literature, 1991)

One thought on “Asenath: The Seventh Matriarch”