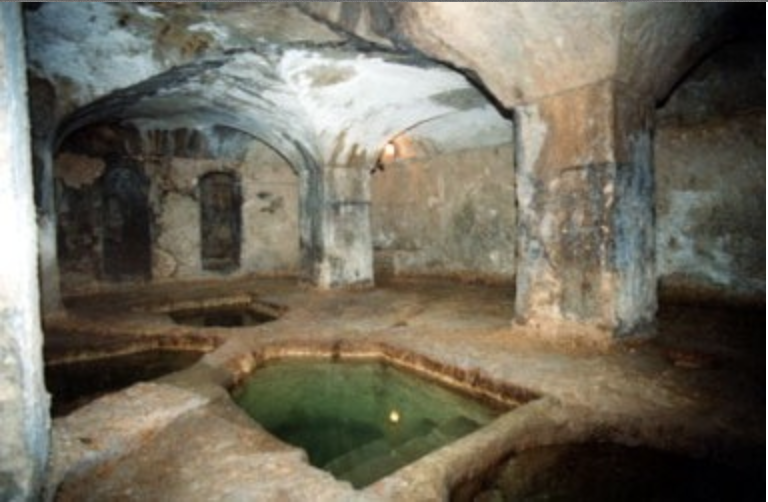 I had the privilege of visiting the most prominent Jewish site of Sicily: the mikvah of Syracuse, the most ancient ritual bath discovered in Europe. A mikvah (also miqvah or mikveh; mikvot, pl.) is a specially designed pool of water used for purification purposes. In the 1980’s a Sicilian noble woman purchased a crumbling palazzo in the ancient Jewish quarter of Syracuse (the Giudecca) on the connected island of Ortigia. Clearly the area has undergone extensive renovation in the last few decades but retains the original labyrinth of narrow medieval streets and walkways. 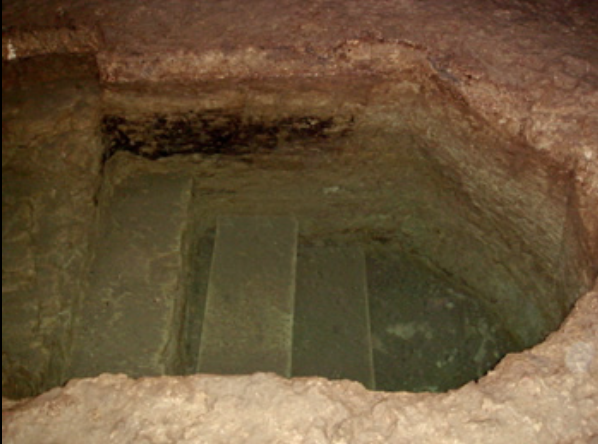 During the extensive restoration work to convert the old palace into a boutique hotel, a stone staircase was revealed that descended 30 feet underground. After draining the underground chamber, five immersion pools were discovered, all connected by a common source of water, as required by Jewish law. Archaeological evidence left no doubt that an ancient Jewish ritual bath had been uncovered. The bathing complex is believed to have been constructed in the 6th century CE but its fresh water source dates back to a clearly visible Hellenistic well. It is possible that the Jews of Sicily present during Roman times also utilized the original spring for ritual purposes but no archaeological record remains.

During the Late Middle Ages (circa 1400 CE), the community of Ortigia consisted of as many as 5,000 families and several synagogues. A year after the expulsion of the Jews from Spain, the Inquisition came to Sicily in 1493 and almost overnight the Jewish population either left the island or converted to Christianity. Known as marranos or conversos in Spain, the newly converted Jews were known as neofiti in Sicily. It appears that they filled the mikvah with sand and rock to hide its existence. Eventually their secret was forgotten. Rediscovered 500 years later, the “secret” mikvah still uses the original spring water. The restored mikvah on Via Alagona is occasionally used by Jewish congregations, making it a living legacy.

Immersion in the ritual bath is an important part of Jewish tradition, especially for women who used the mikvah following menstruation, childbirth and before marriage. Men use the ritual bath less frequently. For either gender, the purpose of the immersion was (and still is) not for the purpose of a physical cleansing, but for achieving spiritual renewal. The mikvah ritual was the precedent for the baptism practices of Christianity and the ghusl rites of Islam.

How old is the Jewish tradition of absolution? The only place “mikveh” is specifically mentioned in the Hebrew Bible is Lev. 11:36. Mikveh literally means gathering [of water] without mention of an accompanying ritual. The Hebrew Bible records the tradition of washing in preparation for the Sinai theophany in the 10th century BCE. By the time the story of Bathsheba’s famous rooftop bath is recorded in the 5th century BCE, scholars speculate that ritual washing had become more than a one-time event in a person’s life.

“Given the inclusion of the detail of Bathsheba’s bathing as an integral part of the story, it is likely that bathing after menstruation was practiced during the time of the monarchy” (Klee, p.100; see also Cohen, p. 277).

In the time of the Maccabean Revolt, around 150 BCE, The Book of Judith emphasizes regular absolutions, an indication that the ritual was beginning to be held up as a standard of righteousness, particularly among the pious community (the precursors to the Pharisees) who sought to “go the extra mile” in following the commandments. By the first century CE, ritual bathing had become a routine and widespread practice, evidenced by the great number of mikvot uncovered by archaeological excavations, with the greatest concentration around the temple mount. After the temple was destroyed in 70 CE, ritual bathing continued with increasingly detailed specifications outlined by the rabbis.

Throughout the world, contemporary Jewish communities of any size have at least one mikvah. For many women, the sacred space is revered as highly as if they bathed in preparation for the awesome visitation of God on Mount Sinai. The details of the ancient tradition has changed over the millennia but the impulse to find renewal under the waters of purification has not. I feel blessed that in my travels I’ve had the opportunity to visit these special places from so many different epochs of Jewish history. It has been another way to reach back in time and hold hands with the women of the Bible.

Cohen, Shaye J.D. – “Menstruants and the Sacred in Judaism and Christianity.” in Women’s History and Ancient History, Sarah B. Pomeroy, ed. (Chapel Hill and London: University of North Carolina Press, 1991) 273-299.

Frymer-Kensky, Tikva S. – “Pollution, Purification, and Purgation in Biblical Israel” in The Word of the Lord Shall Go Forth: Essays in Honor of David Noel Freedman, Carol Meyers and Michael Patrick O’Connor, eds. (Eisenbrauns, 1983) 399-414.

Kaplan, Aryeh – Waters of Eden: The Mystery of the Mikveh (Mesorah Publications, 1993)

Miller, Stuart S. – “Stepped Pools and the Non-Existent Monolithic ‘Miqveh'” in The Archaeology of Difference: Gender, Ethnicity, Class, and the ‘Other’ in Antiquity: Studies in Honor of Eric M. Meyers, D.R. Edwards and C.T. McCollough, eds. (American Schools of Oriental Research, 2007) 215-34.

Polak-Sahm, Varda – The House of Secrets: The Hidden World of the Mikveh (Beacon Press, 2010)

Wise, Carol Selkin – “Miqwaot and Second Temple Sectarianism” in The Archaeology of Difference: Gender, Ethnicity, Class, and the ‘Other’ in Antiquity: Studies in Honor of Eric M. Meyers, D.R. Edwards and C.T. McCollough, eds. (American Schools of Oriental Research, 2007)

Wright III, B. G. – “Jewish Ritual Baths – Interpreting the Digs and the Texts: Some Issues in the Social History of the Second Temple Judaism” in The Archaeology of Israel. Constructing the Past, Interpreting the Present, N. Silberman and D. Small, eds. Journal for the Study of the Old Testament Supplement 237 ( Bloomsbury T&T Clark, 1997) pp. 197-214.