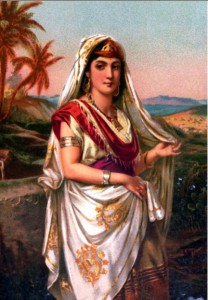 Prior to the story of Cozbi, in Numbers 25, we learn that Balak, the king of Moab, listened to the advice of the mercenary prophet Balaam to entice the Israelites away from Yahweh by encouraging them to fornicate with the Moabite women. The result was a plague that killed 24,000 Israelites. In the midst of this state of affairs, Zimri, the son of the chief of the Simeonites, cohabited with Cozbi, the daughter of a Midianite chieftain. In a rage, the priest Phinehas stabbed the couple to death in order to stop the plague. It seemed to have done the trick. End of story? Not quite. The narrative bristles with possible interpretations that shed more light on Cozbi.

“Just then one of the Israelites [Zimri] came and brought a Midianite woman [Cozbi] over to his companions, in the sight of Moses and of the whole Israelite community who were weeping at the entrance of the Tent of Meeting. When Phinehas, son of Eleazar son of Aaron the priest, saw this, he left the assembly and, taking a spear in his hand, he followed the Israelite into the chamber and stabbed both of them, the Israelite and the woman, through the belly. Then the plague against the Israelites was checked.” Numbers 25:6-8 (JPS)

Cozbi’s name has both sexual and religious connotations. Since her name is only introduced after the description of her death, her name may have been used to justify her demise. The Semitic root kzb can mean both to deceive and to be voluptuous, charming and full of sexual vigor. Euphemistically her name could mean “sexual parts.” “The name may also have had other religious overtones, as kuzbu was a attribute of several Mesopotamian deities… including, significantly, Ishtar and Asherah…” (Lutzky, p.547). Thus the name Cozbi would have evoked a strong reaction among the Israelites.

That she was specifically named alerts the reader that she may have been a well known and prominent woman in the Midianite community. “Sanctuary of the Stomach,” the words translated above as “belly” and “into the chamber” have a long history of interpretation. If you will bear with me I will try to explain how the terms might help us understand who Cozbi was, other than the daughter of a Midianite chieftain. Reif noted that the two terms are very similar and form a word-pay, viz., “in the qubbah she was pierced in her qayba.” Scholars have concluded that the desert tabernacle was closely related to pre-Islamic nomadic tent-shrine called a qubbah (Cross, Davis). In this context several interpreters have concluded that the couple wasn’t having sex in just any old place, but in a Midianite tent-shrine pitched on sacred ground near the Israelite tent of the assembly.

Though the pun was intended to highlight the disgust the narrator had for their copulation at the sacred site, the two terms used together could be read as describing Cozbi’s body as a shrine. Morgenstern explains that traditionally a qubbah was attended by a female priest, occupied by women from the noblest family of the tribe, set up next to the tribal chief’s tent and was used for divination in times of crisis. Cozbi “may have been a local diviner (prophetess) or priestess, called upon to help end the plague, but slain in the tent-shrine either because of the implicit cultic infidelity… or as symbolic slaying of the deity the priestess served” (Lutzky, p.547). It appears that in a desperate attempt to stop the plague, instead of relying on God, Zimri showed his faith in Midianite religious practices.

“His crime was not that he had sexual relations with her… but that he installed her in a qubbah next to his tent, possibly engaging her as a diviner in an attempt to find the means of placating the deity responsible for the plague…Phinehas, offended at the usurpation of his priestly rights and at this further apostasy from Yhwh, followed Zimri into the qubbah and dispatched both him and the woman in her qubbah” (Reif, p.205).

The result of this assignation was a full-scale war with the Midianites as commanded by God.

After the battle, ironically the victorious Israelites took the remaining Midianite virgins as spoil for the purposes of marriage. This throws into doubt the assumption of many commentators that Zimri was punished for being intimate with a foreigner. As exemplified by Rahab, Zipporah, Joseph’s wife, Moses’ Cushite wife etc., non-Israelite wives were not forbidden despite the proscriptions against intermarriage in Exodus 34:15-16 and Deut. 7:3-4. It is possible that Zimri and Cozbi were married. It is possible that the marriage was arranged by their two fathers, both chieftains of their tribes and may therefore have been seen as legitimate. Both of them were “aristocrats, members of powerful and distinguished clans… the assumption that their relationship was perfectly legal, a result of careful paternal negotiations, cannot be dismissed” (Sivan, p.72). Morgenstern concludes that the qubbah of Numbers 25 was the canopy for the marriage of Zimri and Cozbi. As a married couple they would then not be engaged in outrageously provocative sexual behavior, but marital relations in their private tent. Their ruthless elimination was a consequence of other elements of the drama.

The narrative states that Zimri brought Cozbi close before Moses and the whole congregation of Israel. Grossman notes that “[b]y describing the public nature of Zimri’s action, the text changes it from an individual being overwhelmed by his desires to a deliberate act of rebellion” (p.65). Whether Zimri’s behavior was an act of revolt or was an “innocent” attempt to stop the plague with whatever means necessary, the personal action was deliberately turned into a national cause.

“If the verb ‘approaching’ is to be taken in a legal sense, it may be surmised that the couple, like the daughters of Zelophehad who ‘approached’ Moses also at the entry to the tent (Num. 27: 1-5), had a case to plead. Perhaps, then the couple required judicial arbitration of sorts and specifically a decision of the leader. In this case it may be further surmised that they had a perfectly good reason to appear in public, if a poor judgment of circumstances” (Sivan, p.71).

If Zimri and Cozbi were approaching Moses through proper legal procedures with a suggestion on how to use Midianite rituals to end the plague, Phinehas’ brutal act might have been an overreaction. Though his violence is legitimized by God after the fact, one must keep in mind that Moses shared close religious ties with the Midianites through his father-in-law Jethro. Zimri and Cozbi then might have thought it reasonable to approach the Israelite leadership on this matter.

Whether or not the tent was a place of divination or a wedding canopy, the priest Phineas’ act is clearly symbolic. The use of a spear to pierce Cozbi through the womb was meant to be a phallic representation, a “rape” of the Midianite woman (Zlotnick, p.52). Unfortunately there is a long history and even current usage of rape as a military technique to dehumanize and demoralize the enemy. “Violence against the body is similar to violence against the society” (Berquist, p.46). Rape of a woman in the Hebrew Bible was theft of sexual property (Thistlethwaite, p.62). By symbolically raping Cozbi, Phineas declared war on the entire body of Midianites by taking what was “theirs.” As we pursue our own “holy wars,” Cozbi challenges us to remember that there is always another side to the story worth contemplating. Only then do we have a chance of finding peace.

Zlotnick, Helena – “A Woman of the Wilderness: The Rape of Cozbi” in Dinah’s Daughters: Gender and Judaism from the Hebrew Bible to Late Antiquity (Philadelphia: University of Pennsylvania Press, 2002)