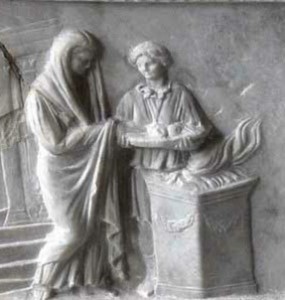 In the beginning of Leviticus, God tells Moses to speak to all the Israelite people and instruct each person in the laws of ritual sacrifice. Lev. 1:5 specifically uses the gender neutral nepes (person) when discussing those responsible for slaughtering the sacrificial animals. “Traditional translations … obscure the fact that both women and men are given instructions about offerings to YHWH.” (Meyers, p.203). Let’s explore how Elisheba, Aaron’s wife and the sister-in-law of Moses, participated in the rites of ancient Israel.

The limited knowledge we have of Elisheba provides us with a glimpse into the world of priest’s wives in the Bible. She came from a prominent family; her brother Naashon was a prince of the tribe of Judah (Ex. 6:23). By marrying Aaron she united the tribe of Judah with the tribe of Levi. Through her sons Eleazar and Ithamar she became the ancestress of the entire Levitical priesthood. While the Temple stood the the wives and mothers of High Priests were particularly wealthy and socially influential. “Females in high Priestly families [held] a special status in Temple society and the power to determine Temple procedures and even regulations.” (Safrai, pp.259-60)

Like any other mother in Israel, Elisheba would have been required to come to the sanctuary to present burnt and sin offerings (Lev. 12:6) after giving birth. This practice continued until the first century. According to the early rabbis who had some experience with the Temple in Jerusalem before its destruction in 70 CE, women could also slaughter the Passover lamb on behalf of their households (Tosefta Pesahim 7:4, 29). The Mishna preserves the story of a race between a man’s sons and daughters to reach Jerusalem to offer the Passover lamb. The daughters won and the lamb was assigned to the family’s name. Thus they acted as legitimate partners in this religious act.

Chana Safrai in her dissertation Women in the Temple, demonstrates that women not only participated in the Passover sacrifice, but also the offering of first fruits, the pilgrimages, monetary donations to the Temple and other private sacrifices. Proverbs 9:2 reveals that women could also perform the actual slaughtering of the animals they brought to the Temple for sacrifice.

“Later Rabbinic exegesis of both the Bible and Mishnah affirmed the right and duty of women as well as men to engage in the ritual slaughter of animals for both sacrifice and for secular purposes.” (Gruber, The Status of Women in Ancient Judaism, p.155).

Together with her daughters, Elisheba would have eaten the meat of the sacrifices along with her priestly husband and sons (Lev. 22:12, 13).

Elisheba experienced both the heights and the depths of motherhood. Her other two sons, Nadab and Abihu, offered “strange fire before the Lord, which he commanded them not and they died before the Lord” (Lev. 10:1,2). Regardless of the animals Elisheba may have brought for ritual slaughter, her greatest sacrifice may have been accepting the will of Yahweh who ordered the death of her sons.

Gruber, Mayer I. – “The Status of Women in Ancient Judaism” in Where We Stand: Issues and Debates in Ancient Judaism, vol 2, pt. 3 of Judaism in Late Antiquity, Jacob Neusner and Alan J. Avery-Peck, eds. (Brill, 1999)

Gruber, Mayer I. – “Women in the Cult according to the Priestly Code” in Judaic Perspectives on Ancient Israel, Jacob Neusner, Baruch A. Levine, and Ernest S. Frerichs, eds. (Philadelphia : Fortress Press, 1987)

Safrai,  Chana – Women and Temple: The Status and Role of Women in the Second Temple of Jerusalem. Dissertation. KTUA, Amsterdam: 1991.