For the past year and a half I have been living in southern Italy, in the ancient Roman city of Brundisium, today’s Brindisi. It just so happens that I’ve been working on a historical novel which takes place in this ancient city (as well as other locations). Ironically I had already started writing, Junia: The Forgotten Apostle before getting the opportunity to move here. Of course I’ve taken advantage of my location to walk in the footsteps of my main character. I want to start sharing some of these experiences on my new blog and website at Robincohn.net.

Let’s start with Brindisi. Due to its natural port on the Adriatic Sea, the city became a major Roman harbor important for international travel and trade throughout the Mediterranean. The harbor, in the shape of a deer’s antlers, inspired the city’s coat of arms as well as its ancient Greek name of Brentesion, meaning “deer’s head.” 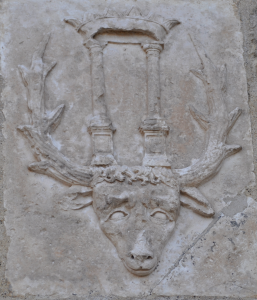 The Messapian people founded the city in the 8th century BCE. Eventually Brindisi attracted the attention of Rome which managed to conquer the city in 267 BCE and renamed it Brundisium. The picture above shows two columns above the deer’s head representing the two columns that marked the terminal point of the  famous Via Appia (Appian Way), the main road from the south of Italy to Rome in the north. One column still stands, its twin now residing in Lecce further down the coast.

Cicero, Horace and Virgil all stayed in the city, the latter dying here in 19 BCE. The crusades were closely linked to the city as it was the point of departure for numerous expeditions. Pilgrims sailed from Brindisi to Jerusalem. The area is scattered with the ruins, the result of invasions by the Goths, Normans and a long list of  various kingdoms who fought over the only great Adriatic port in southern Italy.

The other day I ran into an ancient Roman fountain on the northern edge of Brindisi. Since I arrived, it had been under restoration and just recently reopened. 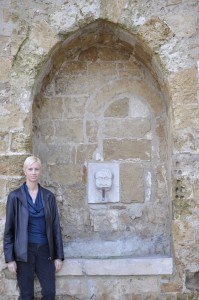 Currently named the Tancred Fountain based on its restoration in 1192 CE by Norman King Tancred, in Roman times it was called the Big Fountain. (The photo only shows one of the many spigots in the complex.) The fountain marked the access to the town from the north and was well known because it poured abundant and pure water. As the best fountain in Brindisi, the sick gathered to restore themselves with the fresh spring water. Since my character Junia is a healer, I imagine that she would often visit this place to practice her trade.

Later the same day I finished reading Priscilla and Aquila by Marie Noel Keller. This husband and wife missionary team were good friends with the apostle Paul and in my retelling of the story, they also worked closely with the apostle Junia. Together they came and went through Brindisi on their various travels. So it was a delight to read the following:

“It is likely Priscilla and Aquila walked the Appian Way to Brindisi. From there they went to Corinth by boat (late spring-early fall) and arrived at the port of Lechaeon.”  p. 13

References to Brindisi crop up repeatedly in my reading about ancient Christianity. That’s one of the joys of living in a richly historical city.

4 thoughts on “Hello from Brindisi, Italy”