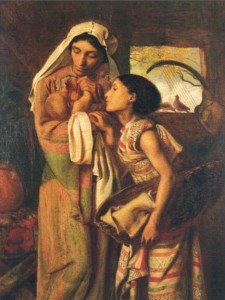 Moses in his Mother’s arms was painted by the British artist Simeon Solomon (1840–1905).

In a study of the many woman of Exodus, the first women we encounter are the midwives Puah and Shiprah. In an attempt to control the Hebrew population of slaves, the king of Egypt commanded the midwives to kill all the Hebrew boys as they were born. The midwives make up a story about how quickly Hebrew women give birth and thereby thwart Pharaoh’s plan. If it weren’t for their defiance, Moses would not have lived.

Then Pharaoh commanded all Egyptians to throw the male Hebrew babies into the Nile. If Moses’ mother Jochebed had not defied the royal edict and constructed a waterproof basket and released him into the river, Moses would not have lived. If Miriam had not facilitated the retrieval of her brother from the water, and if Pharaoh’s daughter had not adopted the baby as her own, Moses probably would not have lived. If any of these links in the chain of action had failed, then the chances of genocide would have been very high, or at the very least the Hebrew people would have faded into history. “God came in an unexpected way, using a diverse collection of women who came together to fulfill God’s liberation plan. This intergenerational, interfaith, interracial group of women came together, creating the ‘Moses event.'” (Gill, p.20) This pattern of “if it hadn’t been for this one thing then all would be lost” is a reoccurring theme throughout the Bible. Curiously women tend to be actively involved at these critical moments.

Among all these women, it is Moses’ mother Jochebed I want to focus on. She literally saved the Hebrew people by building an ark, covering it in bitumen and pitch just as Noah did with his bigger vessel. Jochebed even echoed God’s words at creation: “she saw how good he was.” Aside from the difficulty of obtaining the materials while under the watchful eyes of the Egyptians, how might she have come up with her plan? Perhaps she was inspired by the Egyptian myth of Isis who placed her infant son Horus adrift on the Nile. It seems very likely that she did some reconnaissance to determine the bathing habits of the Egyptian princess. In addition she must have had some inside information about the Pharaoh’s daughter’s desire for a child, her compassion, and her rebellious spirit.

Finally, I find it very unlikely that Moses when he became an adult inherently knew the details of his heritage given that he had been raised in the Pharaoh’s household. It is more likely that his mother remained in contact with him even after her services as a wet nurse were no longer needed by the princess. If Pharaoh’s daughter truly intended to defy her father, then she might have made an effort to make sure her adopted son learned of his true identity. This would explain the phrase “he went out among his kinsmen and witnessed their toil” (Ex. 2:11) and as a consequence he tried to protect them by killing an Egyptian afflicting them. Later when he ran away to live with the Midianites, he speaks of reuniting with his family as if he has known them all his life: “‘Let me now go back to my kinsmen who are in Egypt, and see if they are still alive'” (Ex. 4:18). Whereupon Moses seems to seamlessly be reconnected with his sister Miriam and his brother Aaron. Whether Jochebed directly provided Moses with a sense of his heritage or if the princess taught him of his ancestry, Moses learned the value of compassion from his mothers. If it had not been for them, there wouldn’t be a “Moses event.”

During the rabbinical period, Jochebed was highly praised and credited with a number of other heroic and righteous acts. I recommend Barbara L. Thaw Ronson’s book, The Women of the Torah for a summary of these additional stories.

Some commentators argue that this pocket of resistance on behalf of just one male child is a demonstration of the andocentric nature of the text. If it had been Miriam in the ark, and everyone had worked for her salvation, would that make this story egalitarian? Assuming Miriam took up the staff and went before Pharaoh and saved the Hebrew nation, would all the women who assisted her have been less powerful or essential? I think that Puah, Shiprah, Jochebed, Miriam and Pharaoh’s daughter were exceedingly brave and ingenious women regardless of the gender of the child they saved. Though Moses and his actions get more airtime, that doesn’t necessarily mean that he was the only prominent leader. There is a great deal of scholarship that analyzes Miriam’s role as a prophet and what female leadership traditions might have been suppressed. Imagine what we might be missing. Imagine what the Bible would be without the women of Exodus.

Exum, J. Cheryl – ‘”You Shall Let Every Daughter Live’: A Study of Eodus 1.8-2.10″ and “Second Thoughts about Secondary Characters” in A Feminist Companion to Exodus to Deuteronomy, (Series 1), Athalya Brenner, ed. Feminist Companion to the Bible 6. (Sheffield, Eng.: Sheffield Academic Press, 1994)

Ronson, Barbara L. Thaw – The Women of the Torah: Commentaries from the Talmud, Midrash, and Kabbalah (Northvale, N.J.: Jason Aronson, 1999)

2 thoughts on “Jochebed: The Ark Builder”