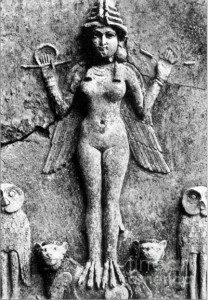 “And desert creatures meet with hyenas, and the wild goat cries to its companion; yes, there the night bird [לילית] rests, and finds herself a resting place” Isaiah 34:14 (Blair’s translation, p.63).

Traditionally this verse has been cited as the only biblical reference to Lilith. Many interpreters, ancient and modern, have understood the Hebrew word לילית as a reference to the demon Lilith and others have translated this as “screech owl” or “night bird” (for example in Blair’s translation above). Which is the more accurate translation? And regardless of which is correct, who was Lilith?

How Did the Night Bird Become Lilith?

Typically the Hebrew word לילית , translated here as “night bird,” is taken to mean a type of desert demon named lilith. However all the other creatures mentioned in this verse are real animals so a night demon would be incongruent in the context (Driver). “Thus there is nothing to support the view that lilith is a ‘demoness’ or other mythological character” (Blair, p.95). However, due to the similarity of the Sumerian/Mesopotamian litu/ardat lili demons, later Jewish traditions interpreted the reference to לילית in Isaiah 34:14 as Lilith, the first wife of Adam.

My thesis is that during the time the Jewish people were forced to live outside of the Promised Land and were exiled in Babylonia (586-538 BCE), Jews became aware of the ancient Mesopotamian mythology of Lilitu and Ardat Lili. Living in close proximity for so long, the Jews incorporated many of the Mesopotamian cultural beliefs into their own religious practices. Despite the fact that they are not etymologically connected, due to the similar sounds of לילית in the biblical writings and the Babylonian Lilitu and Ardat Lili the two concepts merged in Jewish folklore. “The Mesopotamian demon “‘Ardat Lilith’ appears as a ‘maid of desolation,’ one of several ‘harmful spirits’ occupying the mythological space. She is a demon of waste places who preys on males” (Rivlin, p.13). So too, the Lilith took on these characteristics and many more evil characterizations as she was developed in rabbinical writings, folklore and the mystical works of Kabbalah.

Despite the lack of evidence for Lilith in the Bible itself, the idea of a demon who preyed upon men grew in the imagination of Jewish folk culture. For example, from an excavation in Hilla in modern Iraq, bowls were found inscribed with legal documents for the termination of a marriage, “divorce bowls” if you will. The bowls are also inscribed with a figure of “a woman with long hair, sharp breasts, conspicuous vagina, and bound ankles” (Dame, p.307).

“The divorce-bowls are significant because they reveal that, even in the sixth century, long before what Lilly Rivlin calls the ‘official myth’ of her character and narrative was in place, before her identity as a specific, distinct woman had coalesced out of fragments of Sumerian cosmological legends, Babylonian mythology, and Jewish folktales, the figure of Lilith assumes what would become a familiar role: a woman operating both inside and outside her culture, a demonic invader who nonetheless makes the claims of a wife” (Dame, p.307).

Lilith allegedly killed pregnant and birthing women, injured the newborn babies, excited men in their sleep and stole their sperm to make her demon children.

I have discerned two reasons why this vision of Lilith resonated with the Jewish people during and after the Babylonian exile. First, the intellectual reason: Genesis provides two different descriptions of the creation of woman. In the first she is formed out of dirt and appears with the creation of man (Genesis 1:27). In the second, she is created out of the man’s rib. Although the mythology surrounding Lilith developed over time and became more elaborate, it wasn’t until the compilation of folk tales, The Alphabet of Ben Sira in the Middle Ages of 8th century C.E., that rabbinical commentators interpreted the two different stories about the creation of woman to mean that the first woman who was created simultaneously with the man was his first wife, Lilith. The woman created subsequent to the man was thought to be Eve (Rosenfeld, p.135). Adding credibility to the theory that Adam had two wives, Genesis 2:23 retells the story of the creation of woman with the words, “This time she is bone of my bones” implying that last time the woman wasn’t made from his bones and therefore was created independently.

According to The Alphabet of Ben Sira, from the very beginning Lilith and Adam were not compatible.

“They quarreled constantly, as Adam insisted that he was her lord and master, and it was her duty to obey him. Lilith, however, refused to let Adam dominate her. In particular, when Adam wished to lie with Lilith, she took offense at the recumbent position that he demanded. She asked, ‘Why must I lie beneath you? I was made from the same dust as you and am therefore your equal.’ When Adam tried to compel her obedience by force, Lilith in a rage uttered the Ineffable Name of God, rose into the air, and flew far away” (Adler, p. 5).

Thereafter she lived in the desert at the edge of the Red Sea where she was condemned to give birth to an immense number of demons each day. “Here we have two very separate ancient themes: a seductress who attacks sleeping men and a Mother goddess with destructive powers, combined for the first time in the moral myth of the Alphabet” (Rivlin, p.11). Subsequently Lilith appeared in rabbinic literature as a “feared independent woman who hates men, despises and destroys male babies and brings disaster to marriages” (Goldstein, pp.52-3). Lilith became the prooftext for their understanding that equality between the genders was a mistake.

The second reason for Lilith’s prominence in Jewish folk wisdom is the emotional component.

The stories about Lilith “were rewritten by Jewish men in the late Middle Ages, a time of great danger and anxiety for Jews, into cautionary tales featuring a paradigm of female evil. Men insecure about Jewish survival, anxious about their own lack of status, might well have feared the example of a woman who refuses to nurture, feels free to leave, and refuses to let them control the sexual act and the means of reproduction” (Dame, p.311).

Lilith became the most feared demon of Judaism because she embodied male fears of inadequacy and the loss of political, economic and social power. “While all these male fears have been embodied separately in various non-Jewish myths, their coalescence into one Jewish mythical character at this point in history is not hard to understand… In patriarchal societies where a man’s manhood is defined in whole or part by his ability to father children, the fear that Lilith (woman) can prevent men from having children in one way or another means that she robs them of their manhood” (Cantor, pp. 45-6).

Even today Orthodox Jewish families in the east hang amulets on or near a pregnant mother and her newborn to protect them from the evils of Lilith. As Patai notes, a demon that survives in human legend for over four millenniums must be a projection of the culture’s worst fears and desires (Patai, p.252). “Indeed, this motif of the child-stealing witch and the seductive woman is a universally occurring, i.e., archetypical motif” (Hurwitz, p.47). Lilith represents a universal and timeless human concern which we are still in need of grappling with.

“Lilith is like the child who plays a special role in the family: the one who embodies or expresses the family’s pain, rigidly suppressed secrets, and inability to function. The unspoken family contract: to project its rage or unhappiness or unacceptable impulses onto this child, who having no choice, ‘accepts’ the role, and may even fulfill it creatively…Often she is the one who knows the family secrets (‘the secret name of God’)” (Dame, p.313).

Since the 1970’s Lilith has been adopted by the feminist movement as the mascot for equality between the genders. A Jewish feminist magazine has been named after her, countless books have been published about her, and even a popular music festival has honored her name. Times are a changin’.

“I would say that the emergence of these many faces of Lilith shows that women have reached a king of critical mass upon their entry into new kinds of power-a critical mass that lets them at last become willing to reacquaint themselves with the shadow side of femininity” (Wolf, xi).

Mythological creatures change in response to human needs. We forget the negative aspects of those we choose to revere and we demonize what we choose to fear. “Lilith is a side of feminine power with which we must reckon. When she is repressed or dominated, she becomes desperate, enraged, and insane. When she is acknowledged and loved for her fire, she becomes a source for positive creation” (Gottlieb, p.73).

We have a choice to engage with this primeval figure, to integrate her into our own mythologies. There “is a psychological need to know and integrate Lilith as both the personal and collective feminine shadow, the primary and traditional patriarchal mode for dealing with her has been to suppress or cast her out” (Koltuv, p. 91). Lilith represents the shadow side of “Eve,” the respectable, subservient and proper woman who represses her aspirations and true personality. On the other hand, “Lilith is sexual, uninhibited, passionate, unconventional, and fiercely independent” (Adler, p.7). As Wolf notes, Lilith is known for her immense appetite and need to devour what she can’t have. If “there is a disease of the spirit that could characterize modern women as a whole, it is the terror that one’s appetites are excessive and must be controlled, she is a uniquely appropriate reminder for our time that it is only in denying our hungers that they become monstrous” (Wolf, xiii).

For a man, separation from the feminine is as psychologically damaging as it is for women. If the man represses and remains unaware of his need to develop his full range of emotional skills, “the man gets into all kinds of external entanglements and relationship difficulties” (Hurwitz, pp.197-8). He remains emotionally immature and lashes out at the women around him.

The ever-changing mythology of Lilith is an opportunity to learn to forgive the reprehensible aspects of our own character and then embrace both the strength and wisdom we have gained from our journey in the wilderness. Remember, Lilith left the Garden of Eden before the fruit was eaten so she has remained immortal. She will continue to follow us in our dreams and the stories we tell each other.

Blair, Judit M. – De-demonising the Old Testament: an investigation of Azazel, Lilith, Deber, Qeteb and Reshef in the Hebrew Bible (The University of Edinburgh, 2009)

Cantor, Aviva – “The Lilith Question” in On Being a Jewish Feminist, Susannah Heschel, ed. (Schocken, 1995)

Gottlieb, Lynn – She Who Dwells Within: A Feminist Vision of a Renewed Judaism (HarperOne, 1995)

Lanton, E. – Essentials of Demonology: A Study of Jewish and Christian Doctrine Its Origin and Development (Epworth Press, 1949)

Petersen, A.K. – “The Notion of Demon: Open Questions to a Diffuse Concept”, in Die damonen/Demons: The Demonology of Israelite-Jewish and Early Christian Literature in Context of their Environment, A. Lange, H. Lichtenberger and K.F.D. Romheld, eds.