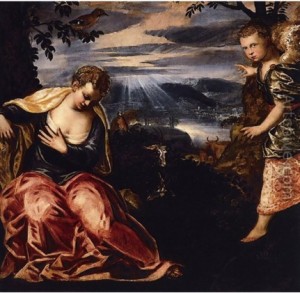 “There was a certain man from Zorah, of the stock of Dan, whose name was Manoah. His wife was barren and had borne no children. An angel of the Lord appeared to the woman and said to her, ‘You are barren and have borne no children: but you shall conceive and bear a son. Now be careful not to drink wine or other intoxicant, or to eat anything unclean. For you are going to going to conceive and bear a son; let no razor touch his head, for the boy is to be a nazirite to God from the womb on.'” Judges 13:2-5

This is the literary formula known by scholars as the “annunciation type-scene.” The category is based on the analysis of the many stories about angels announcing to women that they will give birth to a special son. Some examples of this form are Sarah, Rebecca, Hannah, and Mary. Usually the motif includes the following elements: 1) appearance of the angel, 2) the expression of fear, 3) the message, 4) an objection, 5) reassurance, and 6) the ascension of the angel. (See Robert Alter, The Art of Biblical Narrative pp. 47-52 for a fuller description of the annunciation type-scene.)

After conversing with the man “who looked like an angel of God” the wife relays most of the information she received from the divine messenger.

“His wife tells him that she has had a man visit her and, in the same breath, that she is going to have a baby! We can only imagine what is going through Manoah’s mind. Who exactly was this ‘man of God’? Was he really a messenger from God? What business did he have going directly to Manoah’s wife with this ‘communication’ instead of introducing himself first to the man of the house as only right and proper?… Manoah is in need of answers… His suspicion is showing.” (Fewell, p.129)

Manoah goes on to request another showing of the man and asks all sorts of questions which hint at his objection to what his wife has told him. When Manoah urges the angel to stay and eat, it seems he is testing him to see if he is really a divine messenger and therefore unable to eat. Gideon in Judges 6-7 also tried the food test. In contrast, “Manoah’s wife knows the divine when it appears; Manoah knows it only when it disappears.” (Fewell, p.130) Later when the angel ascends with the smoke of a fire, Manoah finally believes the visitor was an angel. Then he falls down for fear of being killed by God for seeing a visible manifestation of the divine. This ancient belief is also expressed by Hagar (Gen 16:13) and the story of Jacob’s wrestling with a supernatural being (Gen 32:30). Manoah’s wife, on the other hand, has no fear and in fact reassures her husband. In most annunciation type-scenes, the angel is the one who usually does the reassuring. She demonstrates her superior understanding of the situation by explaining that it makes no sense to show someone a miracle and then kill the person.

The effect of these changes to the standard annunciation formula emphasizes the importance of the woman. “These variations make clear the faith of this extraordinary woman and her willingness to be a channel of God’s care for the people.” (Nowell, p.76) The angel’s message is insistently given to her when she is alone and then directs her husband to refer back to her for the answers to his questions. “Manoah lacked faith in his wife’s word and memory, was slow to figure out the identity of their divine visitor, and in the end was afraid for his life. His wife had to explain to him that Yahweh would hardly have bothered to announce the birth of a son and the grand career of that son only to kill them immediately afterward.” (Hackett, p.32) Clearly he is not the center of attention no matter how hard he tries to be.

The feminist scholar, Esther Fuchs, finds a dark underbelly to this fabula. She argues, “[m]others are not sexually alluring or threatening; they are nurturing, as when Manoah fears death and the woman reassures him. She does nothing on her own, and this is a trait that patriarchy finds desirable in a woman. Unlike the Timnite and Delilah, who will soon be seeking Samson’s secrets, she does not ask questions… Rather she runs off to tell her husband, who will ask all the questions in the family.” (Fuchs, p.66)

Furthermore, “[w]hat seems to be a sentimental narrative about the happy transition from emptiness to fullness and from failure to victory is a carefully constructed story intended among other things to promote the institution of motherhood. The annunciation type-scenes…clearly define motherhood as patriarchal institution, not as personal tendency of woman. All the mother figures in these scenes are married wives. There is no instance in the biblical narrative in which an unmarried barren woman is visited by God or divine emissary and miraculously released from her barrenness. This would be unthinkable, since the child born out of wedlock would not be able to carry on the father’s lineage, and would be ostracized from the community as a mamzer [bastard]…” (Fuchs, pp.134-5)

She argues that since the angels who announce the births are all men, that the type-scene drives home the message that women are not in command of their bodies and men are to control the reproductive potential of their wives.

It is true that all the other biblical annunciation type-scenes precede the birth of sons and as soon as the child is born, the mother is quickly forgotten in the story. The daughters do seem to get lost. However, I find it an overstatement to say that there is something sinister in God being involved with the natural processes of life and death, that God is forcing pregnancy on women. Most barren women in the Bible desire to have children so it is not against their will when they are promised offspring by an angel. Since Manoah’s wife doesn’t seem to object to the angel’s announcement, it is probably safe to assume that she is a willing participant in the process. Wanting children is not an androcentric aspiration, in and of itself.

Between the introduction of Manoah at the beginning of this pericope and the description of the son’s birth, he is not in control of his destiny. The wife and the angel turn Manoah’s life upside down.  Though she does not challenge her husband’s authority, it is as if he doesn’t really matter anyway. Manoah shows dependence on his wife by waiting for her to summon him. In contrast, his wife’s independence is underscored by her being in the open field as opposed to the confines of her home. She also keeps some of the details of the encounter with the angel to herself, namely, the instructions for the nazarite vows and her intuition that her future son’s death will have something to do with the deliverance of Israel from the domination of the Philistines. “She has a life independent of her husband, and she has the power to keep powerful knowledge from him.” (Fewell, p.131) How does this subversive tales serve the patriarchy?

Finally, I want to address the woman’s lack of a name. The story goes out of its way to call her anything than by her name. At the same time, the angel balks at giving his name when Manoah asks: “You must not ask for my name; it is unknowable!” I find it interesting that the story makes a point of not naming the woman or the angel and thereby emphasizes the similarity of the two. “…[T]he woman shares not only the anonymity of the angel but also another important element of his identity, namely his role as prophet.” (Reinhartz, Samson’s Mother, p.32) This is implied by the changes she makes to the angel’s message. The angel told her that her son would be a nazarite “from the womb.” When she relays this information to her husband she explains that he will be a nazarite until the day of his death. Her utterance subtly introduces the ultimate fate of Samson, that his death will be a result of his breaking of the vow. “Thus when she substitutes the one phrase for the other, she reveals what she knows, that deliverance [of Israel] has its price.” (Fewell, p.131) Like the angel, her words show her ability to go beyond the surface meaning of events and see them as part of a divine plan.

In sum, I find this story challenges the belief that a woman’s anonymity is always symbolic of her powerlessness and an indication that she is a victim. Sometimes the most sacred things can not be expresses in words.

Hackett, J.A. – “In the Days of Jael; Reclaiming the History of Women in Ancient Israel” in Immaculate and Powerful: The Female in Sared Imagery and Social Reality, Clarissa W. Atkinson, Constance H. Buchanan, and Margaret Ruth Miles, eds., (Boston: Beacon, 1985) 18-29.