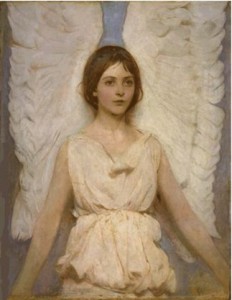 “‘Ascend a lofty mountain, O herald of joy to Zion; Raise your voice with power, O herald [m’vaseret] of joy to Jerusalem.'” Isaiah 40:9

Within the words of comfort in Isaiah 40, we find a number of voices calling out to Zion on God’s behalf with no success. “Rather than relying solely on Divine but disembodied voices of solace, God turns to a messenger of flesh and blood” (Nosan- Blank, p.217). Olyan believes that the messenger is an angel (p.21n). Regardless, in the Hebrew this herald of good tiding is feminine, m’vaseret. It is this lone woman who partners with God and is able to “carry the word of God to bring comfort to those in need” (Nosan-Blank, p.218). Most translations do not call attention to the gender of the messenger because she is without precedence. If she is an angel then she is the only female angel in the Bible. If she is a human messenger, then she is in rare company. Uncomfortable with a creature they cannot categorize, several traditional commentators try to explain away her gender using mental gymnastics such as “scribal error.” Whether the m’vaseret is human or angelic I want to explore the implications of her presence in the Bible.

The most common term for heavenly beings in the Bible is “messenger.” In a number of incidences it is not clear whether the messenger is human or heavenly which creates the impression that the boundaries between divine beings and human beings is somewhat uncertain.

“Differentiation between angelic and human messengers is frequently determined by the context and specific mode of reference. In particular, human messengers deliver the messages of other human beings, whereas angels deliver the messages of God. In keeping with this distinction, an angel is referred to as messenger of the Lord or of God… But problems arise in distinguishing angels from a particular group of human beings-namely, prophets, who are also charged with delivering divine messages” (Reinhartz, p.160).

Genesis 21:17-18, Exodus 3:2-4 and Judges 5:23 are examples of passages where it is unclear if the messenger is human or divine. I bring to your attention, Genesis 18, the most famous episode of this phenomenon where “the Lord appeared to Abraham by the oaks of Mamre…” but then what Abraham saw was a group of “three men standing near him.” “[A] significant number of angel stories play on these confusions” (Reinhartz, p.162). Perhaps we are to learn that it makes no difference if we communicate directly with God, an angel or a prophet. “It may be more appropriate to think about angels not as filling the theological need for a mediator but as a set of beings who, like servants, messengers, wise women, and prophets, were simply an accepted part of Israelite personal and historical experience, on the one hand, and an integral part of the divine realm on the other hand…The inability of the reader to pin down the parameters of the divine-human relationship and the roles of angels within it maintains the sense of God’s ultimate unpredictability and unknowability” (Reinhartz, p.176). 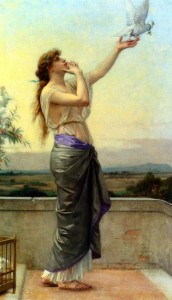 The m’vaseret is not the only female who delivers messages in the Bible. Psalms 68:11 also mentions a number of female messengers proclaiming victory over a fallen enemy. “The role of women announcing divine victory is perhaps related to the professional role of women as victory singers” (Meyers, p.299). Deborah and Miriam exemplify this role through their stunning victory songs.

In 2 Samuel 17:17 we meet the servant girl of En-rogel who carried military intelligence from the high priests Zadok and Abiathar to their sons hiding in En-rogel, a “suburb” of Jerusalem. During this hazardous time when Absalom forced David to flee Jerusalem, it is remarkable that a girl loyal to the monarchy had access to the Temple complex and the confidence of the high priests. Documents throughout the ancient Near East show that female messengers were in the employ of women. “This biblical example is thus exceptional in identifying a female messenger in the employ of men” (Meier, Women, pp.545-6). Burnette-Bletsch deduces that women of her status must have enjoyed a great deal of freedom in leaving and entering a city to have not attracted the attention of the army encamped around the city (p.264). Having studied something of the status of females in times of war, I find it highly unlikely that a girl could simply walk past enemy lines unnoticed. Since she is known as the servant girl of En-rogel I think we can assume that she was a resident of the hamlet. Entrusted to deliver the high priest’s message, I would guess that she knew back roads and secret passageways to return to her hometown without being detected.

Though she may have been singled out for this mission based on her familiarity with the terrain, she was also required to be articulate and trustworthy. In addition, she would have had “sturdy thighs” and have been “swift of foot” to successfully slip behind the front line. The physical requirements were integral to the role of the messenger also known as a “runner.” If the high priest’s message was to be delivered orally, the girl would have been selected for her good memory. If the message was a written document, then in all likelihood she would have been literate since it was the custom in the ancient Near East for a messenger to read out loud the contents of the missives. Green argues that messengers delivered their message verbatim whether orally or in written form. Meier in contrast makes a case that the messenger was empowered to phrase the message in his or her own words for the purposes of presenting the message in the best light even if the message was in a written form. The messenger could then answer questions, make clarifications, and defend the interests of the sender. This then required the messenger to act as a diplomat. Certainly the girl was a trusted member of the high priest’s staff known for her skills and intelligence.

I cannot speculate on the reason why God chose the m’vaseret in Isaiah rather than a male messenger. However, in the human instances it appears that women were considered highly capable of important diplomatic, military and divinely appointed missions– more than we have been lead to believe.

Greene, John T. – The Role of the Messenger and Message in the Ancient Near East (Atlanta: Scholars Press, 1989)

Meyers, Carol – “Those Who Bear Tidings; Herald” in Carol Meyers, Toni Craven and Ross S. Kraemer, eds., Women in Scripture: A Dictionary of Named and Unnamed Women in the Hebrew Bible, The Apocryphal/Deuterocanonical Books, and the New Testament (Grand Rapids, MI: Eerdmans, 2000)