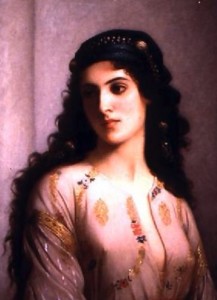 Serah is first mentioned in Genesis in the time of the patriarchs and matriarchs. She was among the 70 who went down to Egypt with Jacob and the only granddaughter mentioned.

“It is inconceivable that Jacob’s twelve sons, who themselves had fifty-three sons in all, should have had only one daughter. In light of the general tendency to omit women from the genealogies, there must be some extraordinary reason for mentioning her in this particular one, although no hint of it is given in the text” (Sarna, p.315).

In the long list of sons mentioned, she certainly stands out in the roll call. The sages speculated that she was specifically mentioned because she was an extraordinary woman. Note however that even though she is named, she is not counted in the number of “persons” born to Jacob (46:18).

Astonishingly, she is mentioned once again in Numbers among the list of those who left Egypt. We are left with the impression that she lived over 400 years! “The meaning of her name, in fact, reflects her endurance. The verb form of the root, samech/resh/het, means to go free, be unrestrained, overrun, exceed.” (Adelman, p.220). Serah was a survivor. In rabbinic legend she held the collective memory of the Hebrew people including their culture, language and rituals. Throughout the people’s enslavement in Egypt she kept the family’s way of life as they transformed from 70 people to a nation of 600,000.

Traditionally she is considered the 70th person who went down to Egypt with Jacob, thus completing the religiously significant total. Later there will be 70 elders who saw God after the revelation at Sinai (Exodus 24:9) and then acted as prophets (Num. 11:23-25). Much later the Sanhedrin, the judicial assembly for the Jewish people, would also be composed of 70 men. “The fact that the ‘seventieth’ chair may be filled by a woman at this point in history is unique and not incidental” (Adelman, p.223). By claiming Serah to be the one to complete the prototype of a major Jewish institution, the rabbis pronounced upon Serah judicial authority and the gifts of prophecy and wisdom.

There are several rabbinic tales about Serah. The first concerns Jacob’s sons who were faced with a dilemma when they discovered that their brother Joseph was still alive in Egypt. After betraying their brother, they lied to Jacob telling him that his beloved son had been killed. How were they going to tell dear old dad the truth? Knowing that Serah had special skills, they asked her to convey the news to Jacob in hopes that he wouldn’t die of shock. When Jacob was entranced in prayer, Serah began singing gently to her grandfather and thereby conveyed the information that Joseph still lived. Jacob then blessed her with immortality. This explained her longevity.

In another midrash, Asher understood that his daughter was a wise woman and so he gave her a secret code which had been passed down to him from Abraham to Isaac to Jacob. The words pakod pakad’ti, “God will surely take notice of you” indicated the time of redemption had arrived. At the burning bush Moses received the password. When Moses used the code, she verified that he indeed was the one that the Israelites should follow out of slavery.

A third midrash explained that the Israelites could not return to the Promised Land without taking Joseph’s bones with them. No one but Serah knew where he was buried. She showed Moses the location of Joseph’s casket so that he could recover the bones. Serah therefore became pivotal to the Israelites’ liberation.

Since Serah was immortal, the midrash also identified her with the wise woman of Abel who lived hundreds of years after the exodus. Again Serah played the role of redeemer by saving the town of Abel from destruction. In rabbinic literature Serah became the embodiment of wisdom. “Serah bat Asher is an exceptional figure in aggadic tradition because she represents a nearly unique instance in which this male-oriented literature fashioned a woman in the role of leader” (Bronner, From Eve, p.42). From a mere name in the Bible she was transformed into a prominent figure in the Talmud and Midrash, a woman who achieved her high status through her own merit. Just as the secret code of redemption was passed from father to son, the rabbis have passed down to us the gift of a powerful woman’s story. Pass it along to the next generation so that she will be counted among the other great heroines of the Bible.