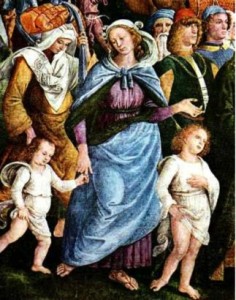 Zipporah, Moses’ wife, was one of seven daughters of the priest of Midian, variously known as Jethro, Reuel and Hobab. After Moses received his directive from Yahweh to return to Egypt to save the Israelites, at a night encampment on the way, God threatened to kill either Moses or his son (the pronouns are unclear). Zipporah averted the imminent death by circumcising her son with a flint. Thereafter Zipporah returned with her sons to her father’s home in Midian. Later she rejoined Moses at Mt. Sinai. Nothing more is recorded of her. Our knowledge of Zipporah is limited to a few verses in the Bible. Most scholars have relegated the Zipporah account as too unfathomable and fragmentary to ever reconstruct into a cohesive narrative whole. However, I think there are sufficient details in these verses to enable us to identify the most plausible explanation of who she was and what she did.