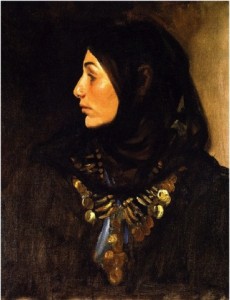 “There came out among the Israelites one whose mother was Israelite and whose father was Egyptian. And a fight broke out in the camp between that half Israelite and a certain Israelite. The son of the Israelite woman pronounced the Name in blasphemy, and he was brought to Moses-now his mother’s name was Shelomith daughter of Dibri of the tribe of Dan-and he was placed in custody, until the decision of the Lord should be made clear to them.” (Lev. 24:10-12)

Everyone has heard of Shelomith. You know, the only named woman in Leviticus. She’s practically a household name. Ok, seriously. Of all the unnamed women with minor and pivotal roles, why is this one woman’s lineage and name given? In an unusual reversal in biblical narratives, her son and the father remain anonymous. Though Shelomith is named, in many ways she is anonymous for she does not speak or act. Her name then draws attention to the “hole” left in the story. We can’t help but wonder why she is mentioned. It is almost as if the text is inviting us to imagine the narrative from her point of view in order to find the missing pieces. What life experiences would lead a former Hebrew slave to give birth to a child by an Egyptian man? Was she raped or did she consent to the union? Did Shelomith and the Egyptian man marry? Perhaps he converted and followed his wife and son into the wilderness. Let’s look to the text to see if we can narrow down the possibilities. END_OF_DOCUMENT_TOKEN_TO_BE_REPLACED