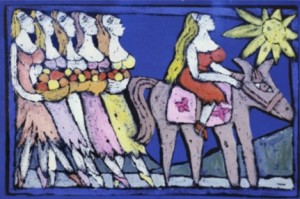 In the middle of an ongoing narrative about David’s rise to power, we find a chapter which focuses on Abigail. “No other character in the episode interacts with all the other characters. Thus, even though the story appears to be about male authority, female presence shines through” (Bach, p.26). Rather than David being glorified in this account, we find Abigail celebrated for her intelligence while being caught between two boorish men. “Nabal, of course, is a fool, but David is heavy-handed and loutish as well. Nabal is too shortsighted to realize the risk inherent in insulting David, but David is too shortsighted to recognize the risk to his future posed by rash vengeance” (Hobbs, p.634-5). It is a rare woman who has not had the experienced of making peace between two difficult people. Abigail has much to teach us on the subject. END_OF_DOCUMENT_TOKEN_TO_BE_REPLACED