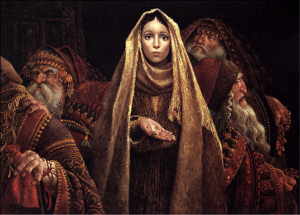 “The daughters of Zelophehad… came forward. The names of the daughters were Mahlah, Noah, Hoglah, Milcah, and Tirzah. They stood before Moses, Eleazar the priest, the chieftains, and the whole assembly, at the entrance of the Tent of Meeting, and they said, ‘Our father died in the wilderness. He was not one of the faction, Korah’s faction, which banded together against the Lord, but died for his own sin; and he has left no sons. Let not our father’s name be lost to his clan just because he had no son! Give us a holding among our father’s kinsmen!” (Numbers 27:1-4)

Throughout the Ancient Near East law codes expressly allowed daughters to inherit. Sumerian, Nuzi, Ugarit, Elam, Hittitite and even Hammurabi’s laws ordained that a daughter could inherit the property of her father (Milgrom, p.482). Unlike it’s centralized urban neighbors, the Bible describes the early stages of Israel’s society to be a tightly knit clan structure with the foremost goal of preserving land inheritance by not allowing it to pass to another clan. “Because the land tangibly symbolized God’s covenant with his people, each family received a share of the land and the assurance of God’s perpetual oversight” (Ulrich, p.535). To lose the land was to annul the Abrahamic covenant which promised not only the land to each local lineage group or mispaha (clan/family) but also a continuing relationship with God throughout the generations (Gen 15:18; 17:7). END_OF_DOCUMENT_TOKEN_TO_BE_REPLACED