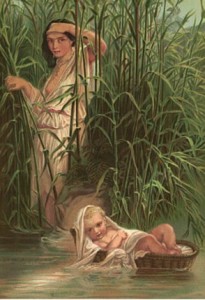 “Miriam and Moses” by Paul Delaroche from Harriet Beecher Stowe’s Woman in Sacred History published in 1873.

Miriam enters the Bible without genealogy, an annunciation scene or a naming ceremony. She isn’t even named. She’s just the sister of Moses. Not until she was an old woman do we learn that Moses’ and Aaron’s sister was named Miriam. Most commentaries will tell you that her name means “bitter water” based on the rabbinical understanding that her name is derived from the Hebrew root mrr, to be bitter. END_OF_DOCUMENT_TOKEN_TO_BE_REPLACED 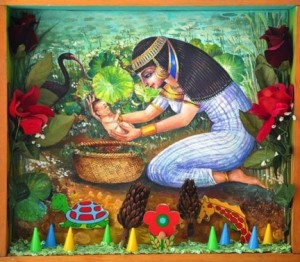 Once Moses’ mother, Jocheved, paradoxically obeyed Pharaoh and “threw” her son in the Nile, Pharaoh’s daughter discovered the baby. Moses’ sister followed the basket and offered the king’s daughter suggestions on how to care for the child. Daughters are prominent in this part of the story, the word occurring six times. “Certainly our attention is being drawn to the ironic connection between Pharaoh’s intent to spare the daughters and the fact that a succession of daughters, the last being his own, contributes to his undoing” (Ackerman, p.95). Overall women dominate the first chapters of Exodus prompting us to wonder about the significance of women in ancient Israelite storytelling. “The question is not why does a story of daughters form the prelude to the exodus, but rather: what effect do these stories about women have on the way we read the exodus story as a whole?” (Exum, p. 60). In particular, I want to explore the way in which the king of Egypt’s own daughter determined the outcome of the story of the exodus. END_OF_DOCUMENT_TOKEN_TO_BE_REPLACED 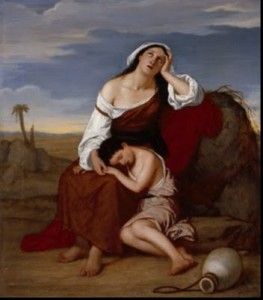 Hagar is the only person in the Bible to give God a name and the only woman to be promised a nation. “None of the mothers of Israel is her equal in this regard” (Fischer, p.18). Yet she is subjected to some of the greatest degradation in the scriptures. Her story has even been used to sanction slavery. White American slaveholders in the mid-1800s took God’s command to Hagar “Return, submit,” as legitimizing the slavery system. But the same text has been a source of hope for liberation by African American communities. END_OF_DOCUMENT_TOKEN_TO_BE_REPLACED 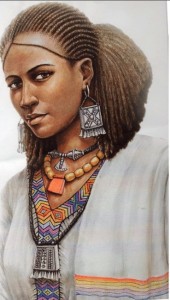 This scene begs us to ask, “Who was this Cushite woman? And what does Moses’ marriage to her have to do with his siblings’ concern about prophetic authority?” The answer to who this woman was will help us understand what part she played in the struggle between the siblings and therefore will provide us with a better understanding of the point of the story. END_OF_DOCUMENT_TOKEN_TO_BE_REPLACED