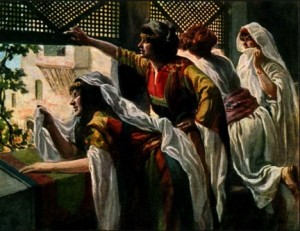 Michal first appears in 1 Sam. 18:20 where we learn that she loves David. Not only was she the only woman in the Bible we are told loved a man but it seems that she also publicly declared her romantic interest in David. Even her father, King Saul, knew of her affections. Being mentally unstable, Saul found the giant-killing upstart a threat to his kingship. Saul promised David his daughter Michal’s hand in marriage if David could slay 100 nasty Philistines and bring back their foreskins. Saul thought that Israel’s enemies would kill David and rid him of the beautiful young warrior. When David delivered not just 100 bloody foreskins but 200, the King Saul had no choice but to deliver on his promise. END_OF_DOCUMENT_TOKEN_TO_BE_REPLACED