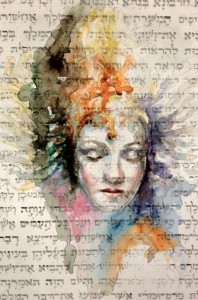 “Queen Vashti gave a banquet for women, in the royal palace of King Ahasuerus. On the seventh day, when the king was merry with wine, he ordered … the seven eunuchs in attendance on King Ahasuerus, to bring Queen Vashti before the king wearing a royal diadem, to display her beauty to the peoples and the officials; for she was a beautiful woman. But Queen Vashti refused to come at the king’s command conveyed by the by the eunuchs. The king was greatly incensed, and his fury burned within him.” Esther 1:9-12 (new JPS translation)

For feminists, Queen Vashti is a heroine because she did not allow herself to be displayed like an object of art, or worse, as a play toy before King Ahasuerus and his drinking buddies. Until very recently commentators depicted Vashti in a negative light for her defiance. In contrast, the author of the story makes a farce of the king’s reaction to Vashti’s refusal. Guided by his advisors, King Ahasuerus turns her simple act into a threat against the entire Persian empire and passes a law that women must be ruled by men.

Later in the Book of Esther, Mordecai (Esther’s cousin) also defies the king’s right-hand man, Haman, by refusing to bow down to him.

“[Mordecai’s] direct challenge to authority, his refusal to debase himself as a person and as a Jew, is seen in all the succeeding commentaries as highly admirable … it is clear that society rewards men for being direct and aggressive while it condemns women, like Vashti, for equivalent behavior. For, in a sense, Mordecai is praised and Vashti is condemned.” (Gendler, pp. 245-6.)

Like Mordecai, Vashti offered no excuses that might help her avoid the consequences. She was direct and assertive. Though the queen is beautiful, she does not rely on her physical appearance to protect her. She believes that it will not give her an advantage in the long run. If she ever found happiness, it was away from Ahasuerus’ approval. We learn from Vashti to take care of ourselves by saying “no,” by declining invitations to go into unsafe places, by refusing to have our boundaries violated.

Though Esther makes different choices, the two queens are not in opposition to each other. I suggest that Esther’s decision to “play her sexuality for all its worth” was just as bold as Vashti’s refusal to parade her sexuality. Vashti represents women’s resistance to oppression. Esther expresses women’s ability to be empowered by their sexuality. Neither response negates the other; they are not opposites. Together they stand among the other heroic biblical women.