On one of my various trips to Rome I made a point to visit the archaeological city of Ostia near the Fiumicino Airport. This ancient harbor town once stood at the mouth of the Tiber River about 30 km from Rome. Big ships stopped here to unload their goods which would then be transported overland or on smaller boats up the river to the imperial city. Visitors arriving from a sea voyage, such as the apostle Paul, disembarked at this point. Jewish travelers undoubtedly sought out Ostia’s synagogue, one of the oldest in the world and the oldest in Europe. The apostle taught at this place of assembly and perhaps lodged there as well. 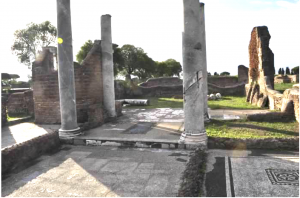 Ancient synagogues typically provided lodging and food for travelers. The original countertops of the kitchen area of the Ostia synagogue have been preserved.

Long before Paul’s arrival, the apostle Junia resided in Rome where she was deeply involved in the Jewish communities and the house churches of what would eventually become the Christian community. In my retelling of her story, Junia arrived via a merchant ship in 40 C.E., and she too made her way to the Ostia synagogue near the ancient shoreline on Via Severiana. Today, the shoreline has long receded so that neither the Mediterranean nor the Tiber are visible. 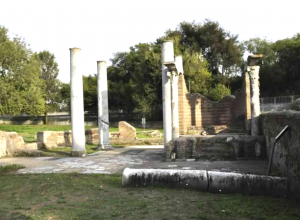 The building dates from the reign of Claudius (41-54 CE) and continued in use as a synagogue into the 5th century CE. Excavation brought to light menorah reliefs and the original paving in geometric patters such as this detail of the Knot of Solomon mosaic. 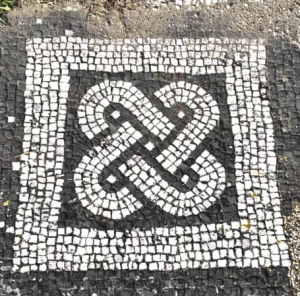 I can’t tell you what a thrill it was to stand in the remains of this building while imagining some of its ancient visitors standing in this exact place. It’s that excitement that draws pilgrims from around the world to walk in the footsteps of the illustrious. If you feel compelled to make this same trek, be sure to purchase the site map. Otherwise, you will wander for hours in the large archaeological park without finding the synagogue. I know this from experience!