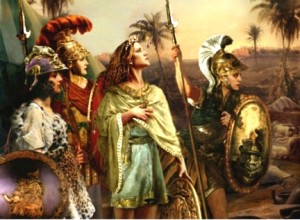 “He made the laver of copper and its stand of copper, from the mirrors of women who performed tasks at the entrance of the Tent of Meeting.” Exodus 38:8 (JPS translation)

Ah yes, the “women who performed tasks.” Who might they be and what tasks might they have performed? Many commentators have argued that the women performed menial tasks at the Tent of Meeting, that they were merely cleaning servants. However, the technical Hebrew word used for “tasks” has a military connotation in contrast to more general terms for “work” and “service.” The same word is used when discussing the tasks the Levite priests perform.

In Hebrew these women are called “hatzov’oth asher tzave’u.” Elsewhere the root of tzave’u is used, the primary definition is “to wage war.” So the term seems to mean women warriors who are stationed at the entrance to the Tent of Meeting. In the context of the time when Yahweh’s title was the Lord of Hosts (of heavenly warriors), the military role these women played would have also been a religious duty.

Now why would these military women have mirrors? Wilda C. Gafney has postulated in her book Daughters of Miriam: Women Prophets in Ancient Israel that the sanctuary guardians used the mirrors (Hebrew = mar’ot) as signaling devices in combat (a “Bronze Age signal corps”). The primary meaning of mar’ot is “vision.” Perhaps a better translation of “mirrors” might be “vision tablets,” something similar to the Urim and Thummin used by Moses and other leaders to communicate with God.

Clarence J. Vos in Women in Old Testament Worship notes that during religious musical performances at the temples, Egyptian women held mirrors in their left hands while using a sistrum in their right. The mirrors were not for viewing their beauty or for ornamentation but for divination. Perhaps Ex. 38:8 is evidence of an institution of holy women in Israel patterned after those of Egypt. Though the mirrors were remade into vessels for the Tent of Meeting there is no indication that the order of women ceased to exist thereafter. 1 Sam. 2:22 suggests that this professional class of sanctuary guardians continued for some time in Israel’s history.

I’m going to let one of my favorite scholars have the last word: “The fact that these serving women are said to be at the entrance to the ‘tent of meeting’ rather than the tabernacle (or temple) may reflect a separate and old sacred tradition, in which the tent was not a ritual space but rather the site of oracular contact between God and a prophetic figure. It is thus possible that the old tradition of the tent of meeting was more gender-inclusive than the tabernacle-temple tradition into which it was absorbed.” (Carol Meyers, Women in Scripture, p. 202.)

Meyers, Carol – “Women at the Entrance to the Tent of Meeting” in Carol Meyers, Toni Craven and Ross S. Kraemer, eds., Women in Scripture: A Dictionary of Named and Unnamed Women in the Hebrew Bible, The Apocryphal/Deuterocanonical Books, and the New Testament (Grand Rapids, MI: Eerdmans, 2000)