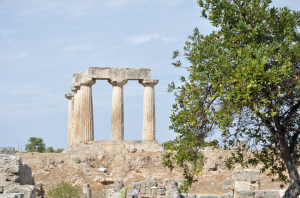 Corinth’s importance in the ancient world had everything to do with its location near a land bridge on the Peloponnesian peninsula. Only 6 km separated the Aegean Sea on the east and the Adriatic Sea on the west. Sailors wishing to travel to Athens just on the other side of the peninsula, had to traverse the very dangerous voyage around the peninsula, well known for its intense storms and sharp rocks. Around 600 B.C.E. Periander built a roadway over which boats could be dragged across the isthmus. This roadway was known as the diolkos. A small portion has been uncovered on the Adriatic side. A moveable wooden platform ran along the roadway in grooves. Smaller vessels could be loaded directly onto the platform, but heavily laden commercial ships had to be unloaded first and their cargo transported across the isthmus. 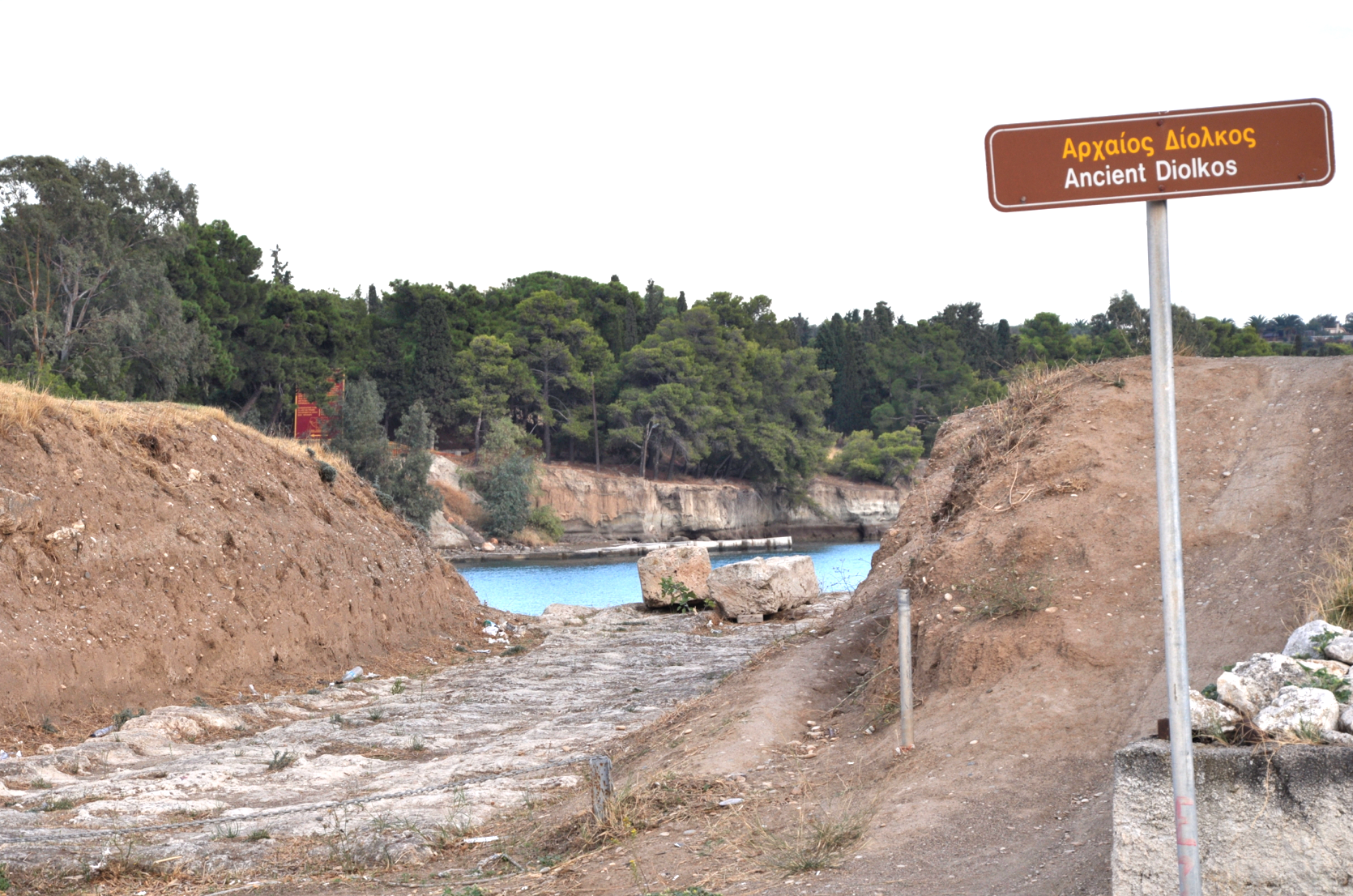 It’s not too hard finding the diolkos but I was still proud when I managed to drive up to it without making any wrong turns, with no road signs and with no map. While cars waited in line for a ship to pass by, my sister Shawna and I ran back and forth across the modern road, following the different sections of the diolkos. (I tend to get a little excited when I visit an ancient site I’ve read about.)

Ever since the 6th century B.C.E. rulers dreamed of cutting a canal through the land bridge to allow ships to bypass the dangerous sea route around the peninsula and many attempts were made. The most notable attempt was by the emperor Nero during the Roman period. I recently learned that he used thousands of Jewish slaves captured during the Jewish Revolt (mid 60’s through 73 C.E.). Many of these slaves died in the next three years of hard labor until the work was abandoned when Nero committed suicide. I might not have pranced around gleefully if I’d known this fact at the time I visited the diolkos last fall. I can imagine the sorrow with which the Jewish and Christian population of Corinth would have looked down from the city in the hills above the expanding canal. The canal was finally completed in 1893 (with paid labor). 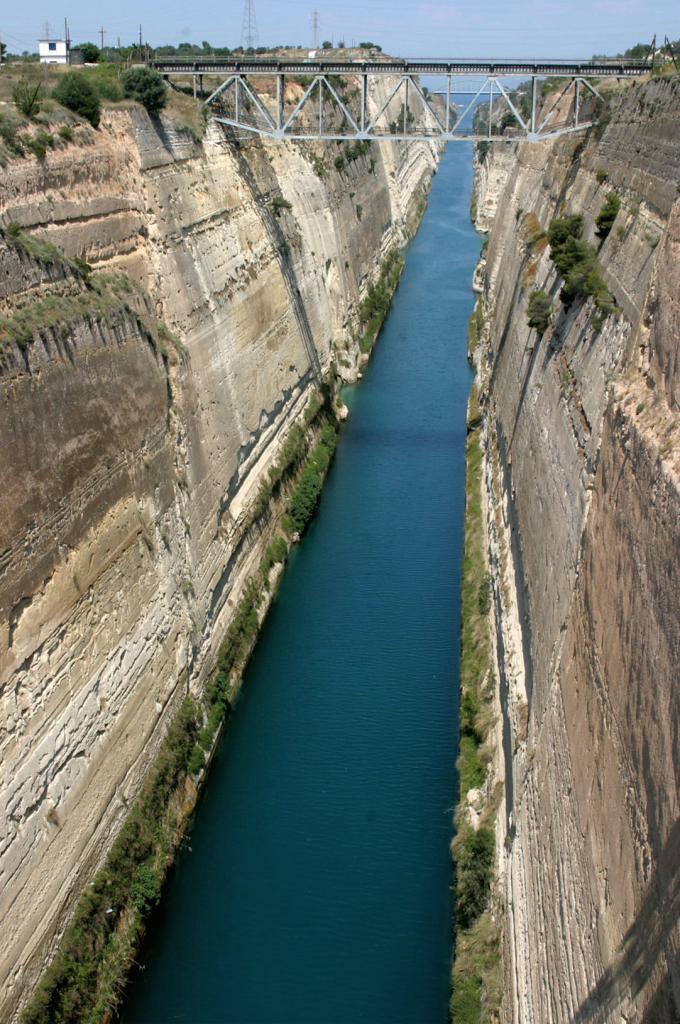 However, my excitement has not diminished for the Jewish symbols I saw in ancient Corinth. In the courtyard of the museum inside the archaeological park there is a stone which reads “Synagogue of the Hebrews.”

This inscription in crude lettering on a lintel stone was found near the entrance to the forum on the Lechaion road. Since stones were often scattered from their original location, it is by no means certain that the original synagogue was in this area. However, the size of the stone suggests that it may not have been moved far from its original location. The lintel stone dates from three or more centuries after the time the first followers of Jesus lived in Corinth. Since new synagogues were frequently erected on the site of previous ones, the location at the entrance to the forum might have been where Priscilla and Aquila taught and the women prophesized. (At this point in time, many of the early Christians still considered themselves Jewish and participated in synagogue functions.)

I’ll write more about the biblical women of Corinth at another time and give you a nice, juicy bibliography. In the meantime, enjoy the pictures. 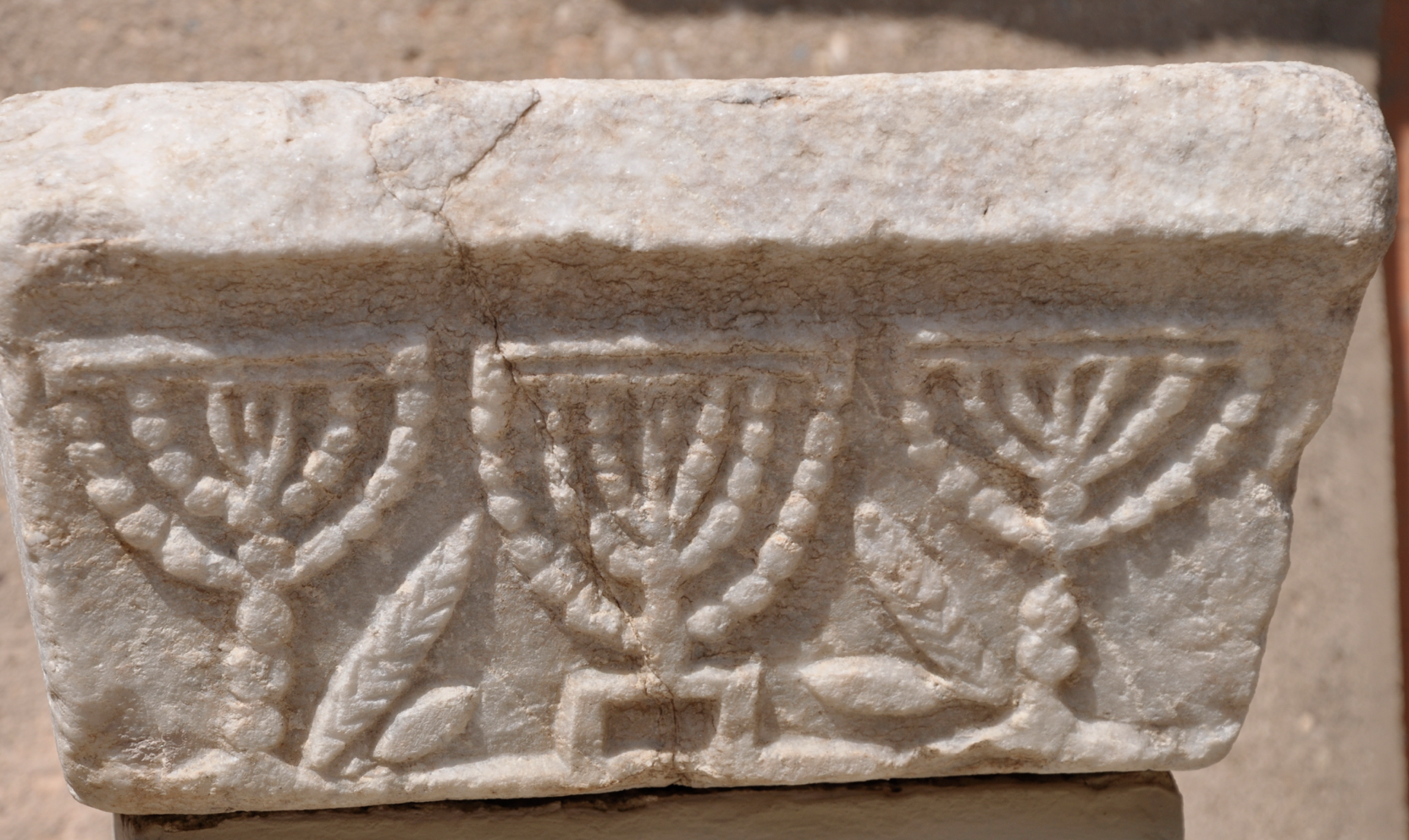