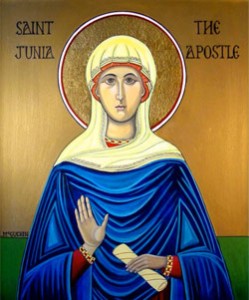 Two thousand years ago in the land of Israel, Jesus exorcises a demon from Joanna, a Jewish noblewoman. In my historical novel, she is known as Junia in the Hellenized court of Antipas, son of Herod the Great. Though she thinks of herself as the obedient wife of Antipas’ viceroy, in gratitude to her healer she defies her husband, and uses her personal wealth to finance the early Jesus movement. Rejected by her husband and the royal court, she finds herself a divorced woman who travels throughout the region with the itinerant preacher. Using her connections among the elite, she tries to intercede on Jesus’ behalf as dangerous forces rise against him. Ultimately she can’t save her savior and must watch his agonizing death. To her astonishment he returns from the dead, appoints her as an apostle and commissions her to spread word of his resurrection throughout the world.