“On the Sabbath day we [Paul and his associates] went outside the gate [of Philippi] by the river, where we supposed there was a place of prayer [προσευχὴν; transliteration: proseuch] and we sat down and spoke to the women who had gathered [συνελθούσαις, synelthousais] there” Acts 16:13. 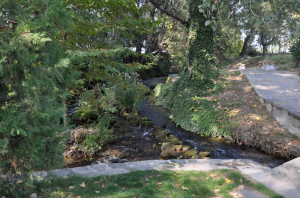 Me standing next to an icon of Lydia on the banks of the “River” Gangites, Philippi, Greece.

This is the place where tradition holds that Lydia assembled with other women (Acts 16:13). Archaeologically there is some controversy whether this is the exact spot but I’ll leave that discussion for another article. What I’m interested in discussing today is whether the site the New Testament describes as a place of prayer [proseuche] was a synagogue and what that meant if only women gathered there.

After reviewing all the uses of gathered, (συνελθούσαις transliteration: synelthousais) throughout the New Testament, the scholar Ivoni Richter Reimer concludes that when a gathering is described as a synelthousais “there is always the idea of a deliberate, purposeful gathering that also implies community” (Reimer, p. 74). From an analysis of Paul’s modus operands of missionary activity throughout his career, he tended to seek out places of Jewish worship upon arriving at a new location and there proclaimed Jesus as the long-awaited Jewish Messiah.

So this place that Paul met women at the banks of a river, was it his usual haunt, the local synagogue, or just a place where the Jewish community prayed? Traditionally scholars have insisted that it couldn’t have been a synagogue service at the banks of the river because ten Jewish men (a minyan) had to be present for an official Jewish assembly. The concept that ten men must be present to legitimate a synagogue service is a later rabbinic ruling that post-dates the story of Lydia. Furthermore, in referring to rabbinic sources “we should be aware that they do not present a unified picture” (Reimer, p.91). According to Megilla 23a, minors and women may be counted among those who can read the Torah aloud in worship, in other words, be considered part of the minimum required to authenticate a synagogue service. Then directly after this ruling comes Megilla 24a which contradicts the first statement because it states that women should not read the Torah in public. In other words, there was a wealth of debate in the Jewish community over whether and how women should be participants in Jewish synagogue services. Therefore, we have no evidence that there was universal agreement that ten participants in synagogue services was required in the mid-first century C.E. regardless of gender. So a gathering of Philippi women praying to a Jewish God could have been a synagogue assembly.

It has been argued for centuries by the dominant exegeses that Philippi had no Jewish community and that’s why there wasn’t an actual synagogue and therefore, women weren’t involved in any “significant” or “official” assembly. Therefore, the women were just silently praying on the banks of the river, nothing more. This is pure supposition. If there wasn’t a Jewish presence in Philippi, then why did Paul go out looking for one, thinking he would find one by the river? The scholar Bernadette Brooten has studied a large variety of ancient sources and has determined that predating the requirement of ten men to form a minyan, ancient tradition allowed women to read the Torah in public and were counted as members of the quorum (Brooten, 94). We simply can’t jump to the conclusion that the women gathered at the bank of the river had nothing to do with a synagogue service.

Unfortunately, there aren’t any other instances of the term “place of prayer” [proseuch] in the New Testament to understand this term better. Taking an interdisciplinary approach, Reimer studied extra-biblical uses of this word. She found that both the early Jewish historian Josephus and his contemporary, the Jewish philosopher, Philo of Alexandria, used the term to describe synagogues (Josephus, Via 277 and Philo Legatio ad Gajum, 155-58). In addition, numerous inscriptions and documents testify that the term proseuch referred to synagogues (Reimer, p. 87, 89, 90).

Therefore, we need to keep in mind the possibility that there exited in Philippi, if not elsewhere, a synagogue mostly composed of women and was considered a legitimate institution by Paul as well as other Jews.

And don’t worry. I’ll write more about Lydia and all the remarkable things we can learn from her.

2 thoughts on “Women and the Ancient Synagogue of Philippi”