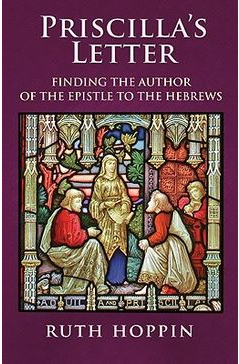 For a number of years I’ve been aware of the hypothesis that a woman wrote one of the books in the New Testament, namely The Epistle to the Hebrews. Being all about women of the Bible, I’d love to discover that a woman wrote at least one of the books in the collection. But I’m also pretty demanding in what constitutes a convincing argument. I’ve examined a number of promising theories about women’s power and influence throughout the centuries, but many promising theories end up being disappointing studies. Wearing my skeptical hat while I conducted my research about women in the Christian Bible, I was surprised to find Ruth Hoppin’s analysis of the authorship of Hebrews cited over and over again by some of the most well respected scholars in the field. I finally succumbed and purchased her book, Priscilla’s Letter: Finding the Author of the Epistle to the Hebrews.

The Priscilla of Hoppin’s title is mentioned six times in the New Testament. She’s an intriguing figure since her name often appears first when she is mentioned along with her husband, Aquila. Most scholars agree that the unusual ordering of the couple’s names indicates that she was more prominent than her husband. In addition, she is described as teaching Apollos, a prominent preacher in Corinth. She also worked alongside Aquila in their tent-making business and became a traveling companion of Paul. Hoppin, as well as others, also believes that Priscilla was the author of Hebrews.

To follow are her most salient arguments in favor of Priscilla’s authorship.

Hebrews is unique among 14,000 extant letters of the time period: there is no introduction or greeting which mentions the author’s name. Furthermore, there is no evidence that this part of the manuscript was lost. All known copies of Hebrews have the same beginning (Hoppin, pp.3-4). If the author’s name was lost, it happened shortly after it was written since Clement of Rome quoted extensively from Hebrews in his letter to the Corinthians in 95 – 96 C.E. Clement did not specify whom he was citing, an unusual practice for the early church writer. In contrast, he mentioned Paul by name when using the apostle’s words. Since Hebrews was written sometime between 65 – 85 C.E., it was highly likely that Clement would have known the author either directly or by word of mouth. The incipient church wasn’t that big and correspondence circulated freely around the Mediterranean.  Hoppin speculates that female authorship would have been an embarrassment to the Church Fathers who wanted to remove leadership positions from women as the Jesus movement matured. Therefore, it appears that the author’s name was deliberately kept a secret.

In an analysis of the word and phrase usage in Hebrews, Hoppin finds an apologetic feminine voice. For instance the work begins: “I appeal to you, brethren, bear with my word of exhortation, for I have written to you briefly.” However, Hebrews is one of the longest letters in the New Testament. Could the author have been trying to say that, “I am not worthy, with the words I have, of doing justice to this important subject”? Apparently the Greek text can also be translated as “only to a slight extent have I given you orders,” a submissive comment, if a woman had been addressing men. Further investigation comparing the language used by women and men in the first century, particularly when writing on theological themes, would help clarify the argument that the author of Hebrews wrote from a feminine point of view.

Hebrews uses the language of parenthood, an allusion one would expect from a female author. The writer understood that Pharaoh’s daughter thought of Moses as her own son, described the hiding of Moses in a tender way (“because they saw he was a beautiful child”), and describeed God leading the people of Israel out of Egypt like a father holding his small son’s hand (Heb. 8:9). Hebrews refers to childhood, education and parental discipline throughout the exposition. Furthermore, the letter does not use any language showing women to be the inferior of men.

A variety of women are mentioned or alluded to, including Sarah, Rahab, the widow of Zarephath, the Shunammite woman, Judith in the Apocrypha and Esther. The Gospel of Luke also mentions a great number of women, but we can’t conclude therefore that its author was female. Hoppin notes that all the women mentioned in Hebrews are envisioned as exemplars of faith with more emphasis than the Hebrew Bible pictured these heroines in the initial rendition of their stories. For example, Heb. 11:11 – “By faith Sarah herself received power to conceive, even when she was past the age, since she considered him faithful who had promised.”

“Perhaps this is what we should add to the author’s psychological profile: generosity in evaluating the spiritual role of Sarah in her nation’s history—seeing her intrinsic faithfulness instead of her momentary confusion and disbelief” (Hoppin, pp.42-43).

From late antiquity to the Renaissance, most commentators assumed that Paul was the letter’s author because of the similarity between the concepts explored by the author of Hebrews and the apostle’s writing. Contemporary scholarship has shown that there is a considerable difference in style and vocabulary than that used in Paul’s authenticated letters. Hoppin suggests that the author of Hebrews intimately understood Paul’s theology and “was closely associated with Paul, engaging in many hours of conversation with him” (Hoppin, p.57). Therefore Hoppin suggests that the author of Hebrews can be found among Paul’s closest companions.

Priscilla moved with Paul from Corinth to Ephesus and then later sailed with him to Syria (Acts 18:18). Priscilla also traveled with Paul’s companion, Timothy (Heb. 13:23). The New Testament certainly portrayed Priscilla as a close acquaintance and housemate of Paul. She had many opportunities to become familiar with the apostle’s theological ideas and therefore, could have conveyed these concepts in her own words, in a style all her own.

In part two of this post, I will explore the other possible candidates for the author of Hebrews.

4 thoughts on “Priscilla, Author of Hebrews?”