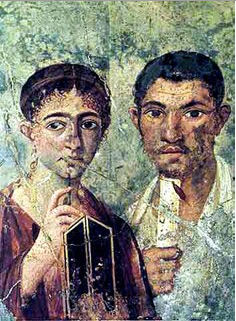 In my last post, I explored the reasons why Hebrews in the New Testament might have been written by a woman, as outlined by Ruth Hoppin, in her book Priscilla’s Letter: Finding the Author of the Epistle to the Hebrews. Setting aside for a moment the feminine characteristics of the epistle, let’s explore the variety of possible authors that have been proposed over the centuries. Initially Paul was fingered, however studies have shown that the writing style of Hebrews differs dramatically from the literary mannerisms of the apostle’s authentic letters.

Here are the other contenders that have been considered:

However, “the author [of Hebrews] is not familiar with ceremonial procedures… Erroneously, the golden censer is said to stand in the holy of Holies (Heb. 9:4). In fact, the censer stood on the altar in front of the ark (Exodus 40:5)…Nor does the High Priest offer daily sacrifices as in Hebrews 7:27…Then too Barnabas tended to observe Jewish food taboos (Galatians 2:13), while the author of Hebrews doubted their efficacy (Heb. 13:9)” (Hoppin, p.63).

Therefore, we can eliminate Barnabas from the lineup.

“The two letters diverge in level of artistry and degree of religious exaltation, testifying to different authorship. Consider matters of style. When faced with two words of like meaning, the frugal author of Hebrews was likely to use one and save the other. With monotonous predictability, Clement used both” (Hoppin, p.58).

Hoppin argues that due to Hebrews’ familiarity with the apostle Paul’s theology, the writer had to be a member of the apostle’s inner circle of companions. In addition, internal textual evidence leads Hoppin to surmise that the following characteristics must also apply to the author of Hebrews:

Of all of Paul’s fellow workers given the above perameters, Priscilla and/or her husband, Aquila, fit the bill as the most likely author(s) of Hebrews. If we add in the evidence for a female writer, then we are left with Priscilla as the sole author. The New Testament certainly portrayed her as a close acquaintance and housemate of Paul. She even moved with him from Corinth to Ephesus and then later sailed with him to Syria (Acts 18:18). Priscilla also traveled with Paul’s companion, Timothy (Heb. 13:23).

Archaeological evidence bears some weight in identifying Priscilla with a prominent family of Rome. As a member of a prestigious family, she would have had the education and resources to write a lofty literary manuscript such as Hebrews.

According to Christian tradition, the Church of St. Prisca on Aventine hill was built over the house of Priscilla and Aquila. In the eighteenth century archaeologists discovered an ancient Roman home near the basilica along with a bronze plaque dated 224 C.E. commemorating an honor given to a senator, Caius Marius Pudens Cornelianus. Some scholars take this to mean that the Pudens family owned the property, and probably had for centuries. Therefore, it is likely that if and when Priscilla and Aquila had lived there, it would have been one of the Pudens’ family properties.

If this line of reasoning is correct, then Priscilla would have been a high ranking Roman woman.

Archaeological excavations have confirmed that a first century Christian underground cemetery, the Catacombs of Priscilla, also belonged to the Pudens’ estate. The name “Priscilla” does not refer to the New Testament character, but to one of the many women with the same name within the Pudens’ family. Regardless, a long-standing tradition holds that the biblical Priscilla and Aquila were buried in this catacomb.

In addition, the name “Peter” appears in both Greek and Latin on many of the earliest tomb inscriptions within the catacomb. Peter was an unusual name in Rome, therefore, the inscriptions probably refer to the apostle who was actively baptizing in this period of time. The apostle Peter converted a Roman senator named Quintus Cornelius Pudens and his wife Priscilla (remember this was a popular name in the Pudens family). Traditionally, the senator invited both Peter and Paul to live in his home in the imperial city. The Church of St. Pudentia is said to have been built over the site of his home. An excavation under the Church in 1870 confirmed it was the house of Pudens.

Just a lot of coincidences? Or a pattern showing that the Priscilla of the New Testament was closely aligned with a highly influential Roman family?

I believe the strongest argument against Hoppin’s line of argument relies on Heb. 11:32. The issue is not apparent in the English translation but in the Greek, the “I” is masculine. Hoppin counters that the participle is neuter. But not everyone agrees. Not knowing Greek, I do not have the qualifications to referee the comments exchanged back and forth between Hoppin and her reviewers. If you want to explore this topic further, I suggest following Hoppin’s line of thought online.

I have to say that Priscilla’s Letter is a lively read and quite thought provoking. I highly recommend Hoppin’s book as a starting point in the exploration of the topic of the female authorship of Hebrews.

In my final analysis, the well-written book does not definitively answer the question, “Who wrote Hebrews?” But that didn’t stop me from speculating on Priscilla’s background in my historical novel, Junia. Who knows, perhaps Junia was the author of Hebrews!

Hoppin, Ruth – “Priscilla and Plausibility: Responding to Questions about Priscilla as Author of Hebrews,” Priscilla Papers, vol. 25, no. 2, Spring 2011.