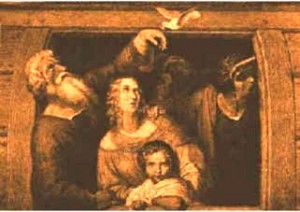 It has long been understood that God intended to begin creation again by wiping the earth clean with a flood while preserving Noah, his family and the animals to repopulate the world. Noah then become the new Adam, and his wife, the new mother of all humans. After the Flood, Noah’s wife carried on Eve’s role since it was from her that all post-Flood generations are descended. Surely, we, her descendants should learn who she was. First off, we can assume that Mrs. Noah was moral and just, otherwise she would not have been saved from the Flood. Although it is said of Noah alone: “For I have seen you before me as a righteous man in this generation” (Gen. 7:1) this in no way negates the possible righteousness of his wife.

But beyond this assumption, the Bible itself sidelines the woman. In the second creation, there is no pesky woman to complicate matters by eating a fruit. Mrs. Noah is neatly anonymous, tucked away somewhere in the ark. “After all, she gets no credit in the Torah for being the pillar that enables Noah to stand straight and accept God’s challenge. She doesn’t even have a name” (Adelman, p.3). Rabbinical, Christian, and Muslim commentators have remedied the situation by giving her at least 103 names. In the Jewish tradition she is known mostly by the name of Naamah and the midrash about Noah’s wife is vast. For a good overview of all her post-biblical incarnations, see Utley’s article cited below.

I thought this was all that we could know about the woman until I discovered the dark side of her tale, the story of her son Ham.

Nakedness of the Father

There is good reason to conclude that Noah’s son Ham had incestuous relations with his mother, Noah’s wife. Genesis 9:20-27 relates this story and it is laden with exegetical problems. The text describes Ham as seeing the “nakedness of his father” while Noah is passed out drunk and naked. When Noah learns of what happened, he curses Ham’s son Canaan. This has always raised the question of what was the true nature of the offense which led Noah to curse his grandson, and who actually committed the offense? It seems odd that the wrongdoing was merely seeing his naked father. Furthermore, Noah reacts based on what Ham’s son “had done (asah) to him,” in other words an action, not just a visual sighting.

Based on the use of the term “to see the nakedness of someone (ra’ah’erwat)” used elsewhere in the Bible, several scholars (Bassett, Bergsma, Forest) have suggested that the term is an idiom meaning to have sexual intercourse by the way the phrase is used in the Levitical laws and elsewhere. “Although the idiom typically used in these laws is ‘to uncover the nakedness of someone’ (galah ‘erwat), both idioms are used in parallelism in Lev. xx 17″ (Bassett, p.233). This verse reads, “And if a man takes his sister, either his father’s daughter or his mother’s daughter, and sees (ra’ah) her nakedness, it is a shameful thing, and they shall be cut off in the sight of the children of their people.” The idiom is only used to describe heterosexual intercourse, even when it speaks of a man seeing another man’s nakedness. “To see a man’s nakedness’ means to have sexual relations with his wife” (Bassett, p.235). Therefore, the use of this phrase in Genesis 9 points to the possibility that Ham had sexual intercourse with his father’s wife. “If so, this would explain the seriousness of the offense which lead to the curse. It would also explain why Noah cursed only one of Ham’s several sons, if it is further assumed that Canaan was the fruit of such a case of incest” (Bassett, p.235).

The way the text mentions over and over again that Ham is the father of Canaan is further evidence for this interpretation. “It is striking that Ham is named a father at the precise moment when he is introduced as a son [see 9:18]. Later, at the transgression of Ham, exactly the same thing happens: ‘Ham, the father of Canaan, saw the nakedness of his father’ (9.22)” (Van Wolde, p.146). The text emphasizes that Ham became a father at the same time that he behaved badly.

Finally, I must mention that Leviticus 18 admonishes the children of Israel to “not perform the practice of the land of Canaan” (aka, the culture of the descendants of Ham) including uncovering the “nakedness of one’s father.” This is also the subject of Deut. 23:1 and 27:20. Such incestuous acts were often about inner-family power struggles and it was usually an ambitious son who attempted to sexually compromise his mother.

“Ham was trying to usurp his father’s authority by sleeping with his mother. Perhaps that’s why he told his brothers what he’d done, rather than keeping it a secret. This reflects a pattern found elsewhere in the Old Testament, especially where sons resent fathers for showing favor to siblings. For example, Jacob’s son Reuben sought to undermine his (Jacob’s) favored half-brother Joseph by taking his father’s concubine – for which he received a paternal curse (see Gen 29:32; 35:22; 49:3-4). Likewise, Absalom resented the plans of his father, King David, to give the throne to one of his younger half-brothers, Solomon. In response, Absalom drove King David out of Jerusalem and then slept with his father’s concubines–right in public–to signify his seizure of royal power” (Hahn, pp. 87-8).

In his sexual conquest of his own mother, Ham may well have made a bid for leadership over his siblings. At least we can find a small measure of comfort in the fact that Noah condemned his son for taking advantage of his mother.

So this is the result of God’s new creation using only the active participation of men while women are kept silently off stage. Oddly, the story of Ham and his curse exonerates Eve. If anyone cared to blame her for bringing evil into the world, they can put that theory to rest. Obviously men can bring disharmony into the world all by themselves.

Imagine the life that Mrs. Noah led. She witnessed the death of her friends and neighbors. Then imagine her trapped in a ship full of wild animals for 40 days and nights. Finally, the ark came to rest and together with her family she had to start life over again. And then just when the vineyards had come to fruition and the gardens could feed her family, just when she thought there could be a new paradise, or at least a clean slate to start again, then she was sexually molested by her own son. This is not an unusual story. It’s just that the setting and characters are different than most. Is it not our responsibility to remember the victims of violence? Is it not our turn to tell their stories so that we can change the world? As Adelman expresses it most perfectly, “Survivors need to tell their tales of survival” (p.4).

Forest, Robert W.E. – “Paradise Lost Again: Violence and Obedience in the Flood Narrative” Journal for the Study of the Old Testament, vol. 19 (June 1994) 3-17.

One thought on “Noah’s Wife: A Second Eve”