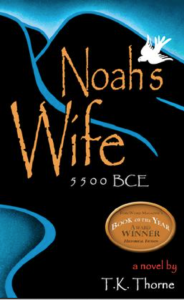 Darren Aronofsy’s Noah film hits theaters today. So taking this as an excellent opportunity, I must tell you about the famous biblical hero’s wife. I’d be remiss if I did not bring to your attention Thorne’s “historical” novel about Mrs. Noah, Na’amah. In one of the many strange coincidences in my life, I just finished reading Noah’s Wife by T.K. Thorne this week. I’ve had Ms. Thorne’s book on my “to be read pile” (ok, bookcase) for several years since I met her in San Diego at the Historical Novel Society’s annual conference. The book was included in my check-in goody bag even though I would have paid good money to own it. A novel about a woman of the Bible? Come on. Who are we kidding here?

I meant to read Noah’s Wife right away, but I won’t bore you with my excuses for not getting to it until now. I finally looked up from all the scholarly historical articles and books I usually read and decided I needed something, well, creative and pre-historical. Of all the books that fit that description in that aforementioned bookcase, only one had to be read for an inexplicable reason. I had no idea that a major motion picture about Noah was about to be released. I had no idea that alleviating my guilt for not reading this book sooner would be this marvelous of an experience.

One of the most popular theories exploring the historical basis of the biblical flood equate the event with a massive flooding of the Black Sea around 5500 BCE (there are other theories as well). Thorne takes this educated hypothesis and runs with it, creating a very real world full of doorways constructed of hanging skins, the smells of smelting copper, and the counting of time by summers, moons and the “hand of days.” We engage in a world where widows wear white head coverings like snow-capped mountains. This is a story full of careful observations of gesture and behavior, agricultural practices and marriage customs, a fully enmeshed cultural world. I reveled in the author’s portrayal of sheepherding practices, how the ancients personified nature, and her excellent understanding of extended familial households, including the development and difference between a matrilineal/matrilocal and patriarchal kinship. Scholarship describes the dynamics of these social systems in later periods, and Thorne cogently projects these practices further back in time with measured allowances.

We learn from ethnographic and sociological studies that ancient cultures were group oriented. Members of the community had very limited concepts of individuality. Many contemporary ethnic groups exhibit many of the same characteristics and are seen as time capsules of ancient practices and mores. For this reason they provide insight into ancient biblical societies. I’m reminded of a fairly recent account of rural immigrants to Istanbul, Turkey. Pinar Uyan-Semerci conducted a study based on extensive interviews with twenty-two women from a gecekandu community steeped in poverty. Uyan-Semerci concluded that the wives and daughters “do not see themselves as separate individuals from their families.” They have little understanding of the concept of individual rights and autonomous agency. Uyan-Semerci’s fieldwork uncovered their discomfort with acting without permission from their fathers and/or husbands. They regarded their bodies as expressions of their husband’s bodies. For most of human history (and prehistory?), child-bearing and parenting constituted women’s “joy of life.” Only in unique situations did women act with anything but the extended clan in mind.

However, contemporary first-world readers have a hard time connecting with this ancient world view. So how does a historically sensitive writer portray a prehistoric women in a way we can relate to? Without any anachronistic faux pas, Thorne designs Na’amah to be fundamentally different–a person with Asperger’s Syndrome. Noah’s wife is unique and we have been invited into her exceptional world. “My mind might be damaged, but I was not stupid.” Here’s my favorite description of perceptions: “The rainbow of colors that sounds made in my mind distracted me.” It was in the rainbow of sensation that she truly understood the world around her. She knew when a man did not have a wife because a woman would have forced him to take a bath in the river. She understood the difference between a goat’s and sheep’s sensitivities to the unexpected. She knew how to pick through the world of sounds to find the “subtle undertone of an active hive” that wove the air like fine stitching. She gathered stones, separating the interesting ones to be placed on her mother’s grave and those the right size for her slingshot. Because she notices everything, we learn everything about her inner and outer world. This is a story that plumbs the emotional chasm between “women’s and men’s” culture, the origins of patriarchy and the decline of the goddesses. T. K. Thorne finds the balance, the white bird of peace. In case you were curious, the Noah of Thorne’s novel remains one righteous guy.

Ask anyone who studies the Bible and you will learn that there are many ways to read the narratives. Sometimes rewriting them is another way to read them carefully. I’ve written about Noah’s wife before but it is an ugly story. When my nine-year-old daughter asked me about her I stopped for a moment, wondering if she should hear what I’d uncovered about of the sordid tale. I’d already read her the children’s book, Noah’s Wife: The Story of Naamah by Sandy Eisenberg Sasso (which I highly recommend), an uplifting version about how she sowed the seeds of life after the waters faded. But after the flood of childhood passes, what do you tell your daughters? I believe the story of Noah’s wife was preserved as a warning to children, to prepare for the worst. Perhaps her ribald story was told around the campfire at night to prepare the young ones for the monsters that lurked in their souls or behind a family member’s deer-skin door.

After preparing my daughter for a hard story, I told her about what I understood about Noah’s wife. She was appalled. She hasn’t wanted to talk to me about a woman of the Bible since. Of course I wonder if I made the wrong choice. Should I have silenced Noah’s wife along with all the other difficult stories about women in the Bible? Should I have sent my daughter away from the campfire before the clan’s storyteller began to speak of ancient “Grimms Brothers” tales?

T.K. Thorne wrestles with the “dark” side of this story but in an entirely different way than the way I’ve perceived it. Her rendition flies over the ancient lands of Anatolia like a falcon intent on a mouse for dinner. She works with the given text but finds nourishment where the received story left pain and unanswered questions. I think I will read this loving, but grown-up story to my daughter. But first we must finish reading The Borrowers together. One step at a time. There are many ways to read a story.