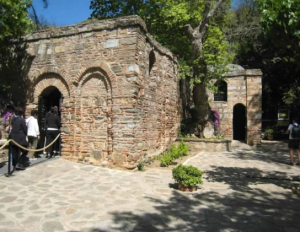 Before traveling to Ephesus in present day Turkey this past fall, I learned that the Catholic Church believes that the actual site of Mary’s house has been found. Popes have even visited it and now over a million visitors tour the little structure every year. Since I was in the area I might as well visit, right?

So I began studying how in the world the Catholics were so certain that the actual house of Mary had been found. Can we trace what happened to Jesus’ mom after the crucifixion? The last we hear of her in the New Testament is in the Gospel of John:

Many have speculated that this unnamed disciple was John the son of Zebedee. Furthermore, this John is widely believed to have written the Gospel of John as well as Revelations. Most scholars find weighty arguments against this claim since the son of Zebedee was a fisherman and unable to write (Acts 4:13). Regardless, early church writers affirmed that he moved with Mary to Ephesus where he lived to an old age and died peacefully. The early Christian community in Ephesus kept alive the memory of Mary’s residence there, eventually building a church dedicated to her in the fourth century C.E.

Nice story but then it gets weirder. In the 19th century a German nun, Katarina Emmerich, claimed that the location of the house of Mary near Ephesus was revealed to her in a dream. Based on the details described by the nun, Lazarist fathers from Izmir explored the area and found the house she described. The existing house is clearly not the home of Mary, since according to archaeological examination the house dates from Byzantine times.

However, the house is built on the remains of a much earlier structure dating from the 1st century CE. Behind the house early explorers discovered rocks with Hebrew inscriptions from Jewish settlers living on the mountain prior to the time Mary could have lived here. A part of me wants to believe with the Catholics that a small band of refugees from Jerusalem joined fellow Jews on Nightingale Mountain and one among them was Mary, the mother of Jesus.