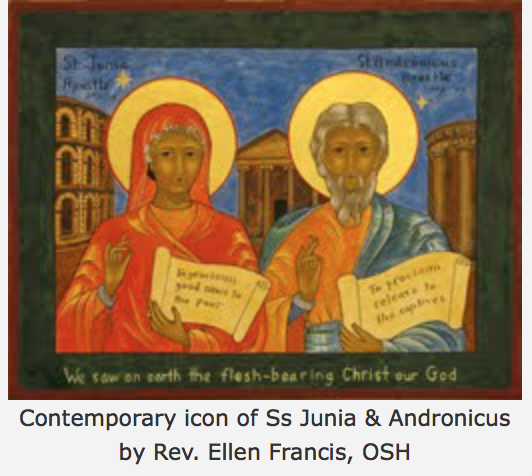 I try to not read too much into coincidences. Weird stuff happens. I get that. But still, they are interesting. For instance I had one today that I’d like to share. While reading Ute Eisen’s Women Officeholders in Early Christianity: Epigraphical and Literary Studies, I came across the following about my favorite Jewish female apostle, Junia:

“In the Liturgikon, the missal of the Byzantine Church, Junia is honored to this day in the Menologion as an apostle…” (p.48).

In a quick flip to the footnote I discovered that Junia is honored on May 17. Umm. That would be today, right? How odd to read this bit of information on May 17 itself!

But what does this mean? Has this Byzantine Church (that I know nothing about) accepted Junia as a female apostle for eons while all the other Christians forgot about her? Boy am I curious. However, as a Jew raised by a Mormon mother and a Presbyterian father, I am way over my head when it comes to the nuances of the Catholic vocabulary. But I’m curious so I start with some definitions.

First, a missal or liturgikon is a book containing all the instructions and texts necessary for the celebration of Mass throughout the year. You know, the book in the pew you grab to follow along with what’s happening. I know what Mass is, but don’t be shy to look that up if you don’t know the term. We’re all learning here together.

Next up, the Byzantine Church. This refers to an Eastern Orthodox Church that uses the customary practices of public worship known as the “Byzantine Rite.” (I think I have that right, but for any Catholics out there who wish to correct me, jump right in and set me straight.) The Eastern Catholic Church together with the Roman Catholic Church make up the Catholic Church as a whole, by the way.

With me so far? So what is the “Menologion?” It’s a book arranged according to the months of the year. Unfortunately, I am unable to determine how long St. Junia has been honored in the Byzantine Church’s Menologion.

This all means that today is the day that some Catholics honor St. Junia, the only named female apostle mentioned in the New Testament. Here’s a link to get into the mood for the celebrations.

Orthodox Wiki calls Junia: “The holy, glorious, all-laudable Apostle Junia of the Seventy,” the “Seventy” referring to the disciples Jesus sent forth to preach (Luke 10:1).

“Junia is the subject of debate within the academic world concerning the implications of a female apostle leading within the early Church, that it might suggest the ordination of women. In Orthodox tradition, however, the title of apostle does not necessarily confer the kind of position that the Twelve had from Christ. Rather, especially when used in reference to the Seventy, it designates someone who served as a missionary for the Church, especially in its first generation. Apostle (from Greek apostolos) literally refers to one who is ‘sent out,’ and its origin is in military usage. Subsequent centuries’ saints who significantly spread the Orthodox faith are often referred to as equal to the Apostles, and this title is given without reference to gender.” (http://orthodoxwiki.org/Apostle_Junia)

Fancy footwork there. Yes, Junia was an apostle (without any debate whether she was a woman or not). But apparently “apostle” doesn’t mean that you have any leadership authority in the Orthodox tradition. Did the twelve apostles get that memo?

Still, I like the title “The holy, glorious, all-laudable Apostle Junia.”

“Junia Gets a Sex Change”

“Was Junia a Historical Person”