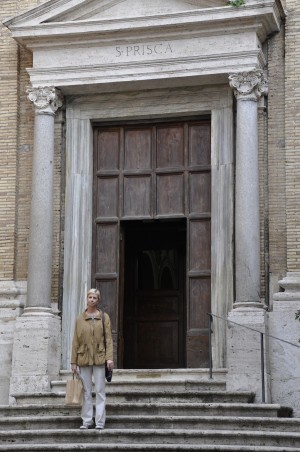 My handy-dandy Rome and Environs: Archaeological Guide states that the Church of Saint Prisca on Aventine Hill in Rome is one of the oldest Christian sites of the city. Of course I wanted to know if there was any possibility this could be the site of Prisca and Aquila’s house mentioned by Paul. “Greet Prisca and Aquila, my co-workers in Christ Jesus…greet also the church at their house” (Romans 16:3, 5). Obviously, the edifice standing behind me in the picture above does not date from the first century C.E. Keep in mind, however, that typically Roman churches were built above the houses of the saints to whom they were later dedicated. Could the current 5th century C.E. structure have been built over a home dating back 2,000 years?

There are two schools of thought about who the church was named after. One tradition identified her with Paul’s co-worker whom he met in Corinth. Prisca and her husband Aquila fled to the Greek city after Emperor Claudius expelled the leading Jewish and Christian leaders in 49 C.E. We have to guess that they returned to Rome after Claudius died because of Paul’s mention of them in his letter to the Romans. Scholars have concluded that the letter was written around 56 C.E. so if we expect to find evidence of their home, we should look for a structure built before or about that time.

The other tradition claims that the Prisca for whom the church was named was the daughter of the afore mentioned couple. This younger Prisca was martyred in the time of Claudius who ruled from 41 – 54 C.E. If true, this would make her Rome’s earliest martyr.

So what can my old friend Archaeology tell us about what lies beneath this church? In 1933, construction for the purposes of strengthening the foundations unearthed a mithraeum, a small underground hall used for the purposes of worshipping the Persian god Mithra. Though this cult was all the rage in Rome in the early centuries of the C.E., what is most interesting for our purposes is that the cultic shrine was built using the walls of a house dating back to the first century C.E. Could this pagan site have been cobbled out of the old house of Prisca and Aquila?

Every source I consulted states that neither the mother nor daughter Prisca can be identified with the site. I’m still looking for a good explanation for this conclusion. In the meantime, I’m assuming that brick stamps dating the first century house to around 95 C.E. means that neither Prisca could have lived there. The timeline is close, but no cigar. Nice try, Robin.

In the grand scheme of things, as fun as it is trying, it doesn’t really matter if we walk in the exact physical footsteps of the women of the Bible. It is far more important that we learn to be better people by studying their powerful stories.

Vermaseren, M.J. and C. C. Van Essen – The Excavations in the Mithraeum of the Church of Santa Prisca in Rome (Leiden: E. J. Brill, 1965)